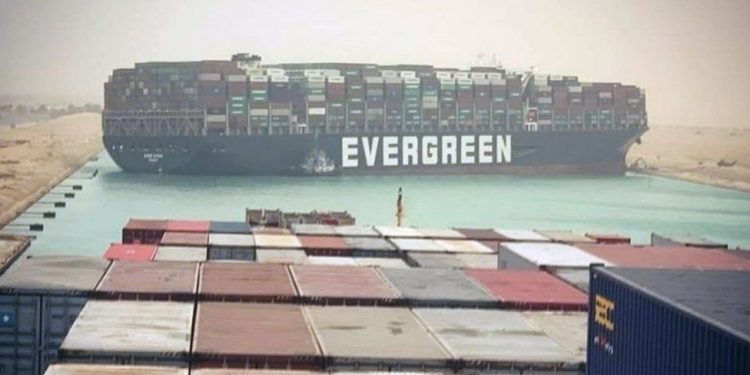 Brussels (Brussels Morning) More than 300 ships remain backed up at both ends of the Suez Canal, as specialist crews work day and night attempting to dislodge the 400-metre-long container ship Ever Given, which has been blocking the canal for more than five days now.

The world’s largest furniture seller, IKEA, has more than 100 containers on the Ever Given, and is currently checking into how many container-loads of its products are on other vessels waiting to enter the canal once the blockage has been cleared. IKEA spokesman Hannes Mård told Reuters that the developing situation might create constraints on the company’s supply chain.

But IKEA is far from the only company affected. Some 50 ships on average pass through the Suez Canal every day. An estimated 30% of the world’s container shipping passes through the canal, a daily flow of more than 9.6 billion dollars worth of appliances, apparel, consumer electronics and other goods from Asia to Europe, and beyond that to the East Coast of the US.

Key seaports in Europe, like Antwerp in Belgium and Felixstowe in the UK are already grappling with backlogs. The high demand for shipped goods during the coronavirus pandemic already stressed the market, with the canal blockage now threatening further serious disruption to supply chains.

“Ships, containers and goods are all in the wrong place,” Douglas Kent, an executive at the Association for Supply Chain Management, said. During regular operations, containers are expected in ports at precise times, scheduled to coincide with the arrival of trucks and trains ready to take them further to their eventual destinations. Even slight disruptions can have a knock-on effect for weeks, while larger disruptions can cascade with serious effects.

Soon, shipping companies will face a difficult choice in determining whether to avoid the Suez Canal altogether. Opting to circumnavigate Africa by re-routing around the Cape of Good Hope will add five-to-ten days to their voyage time, significantly increasing the cost of shipping in terms of delivery time lost and the additional fuel required.

Canal officials did note some progress made in dislodging the huge vessel on Sunday, reporting it had shifted slightly thanks to the coordinated efforts of a flotilla of tugboats plus dredging and earth moving equipment that has been deployed to free the ship’s bow. Officials were hopeful the container ship might be freed by Sunday evening. If successful, that would be great news for the shipping industry and for European retailers, but the five days lost to the blockage so far will undoubtedly reverberate in both the EU and US markets.