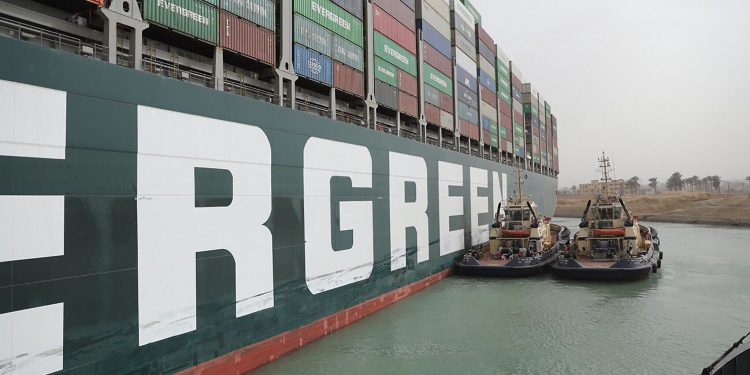 Blockage of the Suez Canal

Brussels (Brussels Morning) The six-day blockage of the Suez Canal, which caused severe disruptions to the global shipping industry, and the ensuing backlog could take weeks or months to clear completely, according to Maersk, the largest global shipping company.

The Copenhagen-based shipping giant informed its clients on Monday that the six day hold-up  in transit, compounded by the hundreds of ships awaiting their turn to pass through the reopened canal plus the scores of ships that had been redirected to circumnavigate Africa, meant that the global logistics chain would continue to experience the aftershocks of the closure for quite some time.

“The ripple effects on global capacity and equipment are significant and the blockage has already triggered a series of further disruptions and backlogs in global shipping that could take weeks, possibly months, to unravel”, the Maersk company advised in a statement.

The Swiss-based Mediterannean Shipping Company (MSC), the world’s second-largest shipping firm, likewise informed its clients over the weekend to prepare for the knock-on effects arising from the temporary closure of one of shipping’s most important trade routes.

“MSC expects this incident to have a very significant impact on the movement of containerised goods, disrupting supply chains beyond the existing challenges posed by the COVID-19 pandemic”, the company announced in a public advisory.

Suez Canal traffic – on average, 50 ships per day – accounts for as much as 30% of global container shipping movements, and some 12% of all global trade, with an estimated 9.6 billion dollars worth of goods transiting through the waterway daily.

The 400-metre container ship Ever Given veered off course last Tuesday, running its bow aground in the soft sand of the canal’s walls, while its stern swiveled, blocking the channel width. This prevented all further traffic from traversing the canal in either direction. The vessel was finally freed on Monday, after days of concentrated efforts by a flotilla of tugboats and land-based dredging machinery.