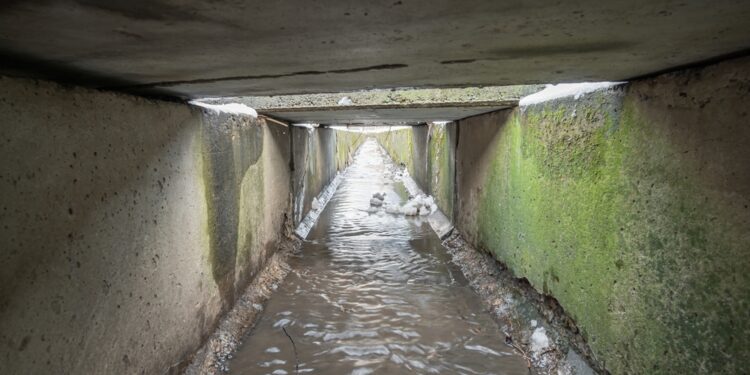 Brussels, (Brussels Morning) – Brussels has 37 storm basins and related buffer structures, but these are hardly used during heavy rainfall. At the same time, a lot of sewage water does flow into the canal at those times. That said, Environment Minister Alain Maron (Ecolo) in the Brussels parliament.

You may remember what the canal looked like at the beginning of June last year: the otherwise dark water suddenly turned brown and here and there dead rats were floating around on the water. The cause: due to the heavy rainfall of the previous days, the sewerage network became saturated and the waste and rainwater overflowed into the canal, a so-called ‘overflow’.

The incident was not an isolated case: last year the sewage system overflowed in this way 19 times into the canal near Sainctelette, according to the non-profit organisation Canal it Up, with all the consequences for the fauna in the canal. In the Senne, such discharges are even more frequent. Every year, approximately 10 million cubic metres of water flows from the sewers into the waterways throughout Brussels, said BRUZZ.

However, Brussels has a lot of buffer capacity. In the entire region there are no fewer than 37 storm basins and other buffer volumes, which have to ensure that the superfluous rainwater is collected in the event of severe thunderstorms. That’s what Brussels Environment Minister Alain Maron (Ecolo) said in parliament last week. He answered questions from Isabelle Emmery (PS) and Aurélie Czekalski (MR) in response to an open letter from Canal it Up.

Only those storm basins are hardly used during heavy rainfall, says Maron. “In order to reduce the volume of water that overflows in waterways, we must therefore invest in dynamic management. The idea is to use a system of valves and sensors to ensure that the basins are filled with water from smaller rain showers, which still cause overflow today.”

That dynamic management has meanwhile also been included in the water management plan, it still sounds. Water company Hydria is investing four million euros by 2025 in the Maalbeek basin.

Park as a buffer

In addition, the region also wants to disconnect the rainwater flow more often from the sewerage network and focus on integrated rainwater management. Cities such as Copenhagen, for example, invested in numerous public and often green spaces, which serve as a water buffer during heavy rain. In Brussels too, wadis are provided in the park at the Ninoofsepoort to buffer rainwater.

The same Copenhagen also ensured, through various types of investments, that the harbour in the centre of the city has such pure water that numerous swimming areas were created. In the 1990s, the sewage was still discharged into the same port.