by Markéta Gregorová MEP
in Opinion 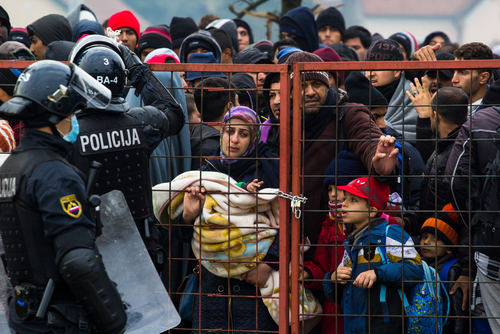 The European Union is facing a hybrid attack by Lukashenko, backed by Putin. What steps must we take to avert the crisis? How do we not atllow dictators to set a precedent out of our weaknesses. How can we prevent people from dying at our borders?

Brussels (Brussels Morning) The situation on the Polish-Belarusian border is becoming more and more tense. The conditions are being exacerbated by falling temperatures that are threatening the lives of thousands of people.

The original culprits for the tragic situation that is unfolding are the architects behind this hybrid attack. The active one is the Belarusian dictator Lukashenko, who, according to all available evidence, created this ad hoc wave of migration in order to destabilise the European Union and punish it for the sanctions it imposed on his regime. The passive architect is the Russian leader Vladimir Putin, who financially keeps Lukashenko’s authoritarian regime alive.

However, it is difficult to demand political accountability for the abuse of civilian lives from politicians who have built their political power on such abuses. The solution to the situation in terms of human lives can therefore only be found in the dialogue between the EU and Poland.

The already confusing situation is becoming even more blurred by the statements of politicians. So, who should we hold accountable? How should we proceed? And what are the respective roles of Brussels and of Warsaw?

A role for Frontex

The solution to the crisis has to be broken down into several stages. The number one priority is to prevent people from dying at the EU border. To assume that this first step should involve some dialogue with Lukashenko is to daydream and can only prolong the agony of innocent people in inhumane conditions as we tally the toll on the abacus of the dead.

In the first place, Frontex should be sent to the Polish-Belarusian border. Frontex is capable of managing the migration process, ad hoc thought it may be, and can correctly assess the eligibility of those seeking to enter the European Union, just as it helped Lithuania a few months ago. There is no point in setting off alarms about a “mass influx of migrants” when their applications can be assessed individually with Frontex’s help. Ultimately, this approach offers a concrete solution to resolve this inadmissible state of affairs. The situation at the border, which has already claimed several lives, does not belong to the civilised world that we in the EU consider ourselves to be part of.

Since any constructive dialogue with Lukashenko, the architect of this inhumane crisis, is not possible in principle, it must be Poland that immediately allows humanitarian organisations the access so urgently needed. This is still the first stage.

Next comes political responsibility and here the EU has already acted, having stepped up the sanctions on Lukashenko. This economic instrument – plus the intensified diplomatic work – should also target the silent supporters of the Lukashenko regime, led by Putin. This is no longer “just” about Belarus and its civil society – the Lukashenko regime directly threatens other states of the European Union. Thus, the tightening of sanctions may also apply to those countries that support Lukashenko and keep his already internally decomposed regime alive as a zombie state.

Finally, I believe that we should support Poland by invoking Article 4 of the NATO Treaty, i.e. NATO-level consultations, as was the case in 2004 during the Crimean crisis on the borders of Lithuania, Latvia and Poland. Let us keep in mind that we have been drawn into a full-fledged hybrid conflict that threatens the security of citizens and territorial integrity. It is the strength of reaction that will serve to deter a similar attack in the long run.

However, for such a strategy to be meaningful, we, as a free world, must begin to act in the first instance, and not looks away. If we let people freeze at our borders, we cannot call ourselves a civilised community.