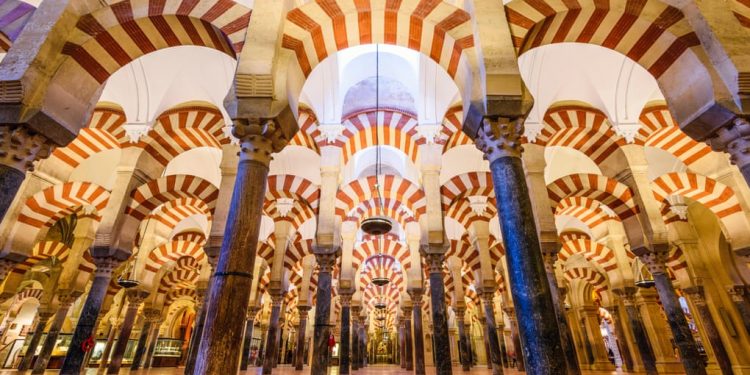 In 2019, a survey asked 3,624 Americans if Arabic numerals should be taught in school. An affronted 56% – and 72% of Republican respondents – said no. Only 29% said yes. The nos didn’t seem to know that Arabic numerals are the things they type with the keypads of their phones.

Something similar has happened with architecture. You can read titans of art history such as Kenneth Clark or Nikolaus Pevsner, who took upon themselves the task of defining European civilisation, and barely find a mention of the Great Mosque of Córdoba or the Alhambra in Granada – extraordinary and important works of architecture that are unarguably located in Europe. It’s a breathtaking omission.

Acccording to Diana Darke, the thing called “gothic”, versions of which (Notre-Dame, Houses of Parliament) have been claimed as the national style of several northern European countries, which theorists such as John Ruskin and Augustus Pugin saw as quintessentially Christian, is deeply indebted to Arab and Muslim builders in the centuries following the life of Muhammad.

Pointed arches, ribbed vaults, spires, campaniles, rose windows, certain types of dome construction, variants of stained glass, the machicolations of castles, twin-towered cathedral fronts, possibly the cloister – all can be traced, says Darke, to older buildings in the Middle East and southern Spain. She argues that the trefoil arch – a three-lobed shape often used on churches as a symbol of the Trinity – is also Arab in origin. Through a hilariously mistaken belief that the Muslim Dome of the Rock in Jerusalem was Solomon’s Temple, a number of churches copied it.

Nor was the influence confined to the middle ages. Brunelleschi’s dome of Florence’s cathedral, an early masterpiece of the Renaissance, seems to have been based on knowledge both of Islamic construction techniques and the writings of Ibn al-Haytham, a scientist in 11th-century Cairo. Antoni Gaudí, devoutly Catholic architect of the church of the Sagrada Família in Barcelona, explicitly learned from the Islamic masterpieces in Spain.

The possible routes of influence were multiple: interaction between the Muslim-ruled parts of Spain and their Christian neighbours, the travels of Crusaders and pilgrims to Jerusalem, trade between cities such as Venice and Arab countries. Even when, as often, these relationships were hostile, opposing sides found ways to borrow or steal ideas from each other. Often they appropriated the necessary craftsmen as well.

Sometimes Darke overstates her case. Some of the connections she makes don’t convince – a link she tries to make between Big Ben and the minaret of the Great Mosque in Aleppo is a bit of a stretch – but she assembles overwhelming evidence that extensive exchanges of ideas and knowledge took place. This shouldn’t be surprising. At a time when long-distance travel was often by sea, the Mediterranean connected more than it divided. Arab civilisation also gave Europe considerable knowledge of mathematics, astronomy, medicine and philosophy, including the words algebra and algorithm. For good measure the word “tabby”, as in cats, comes from a striped fabric named after an Umayyad prince called Attab. So it’s to be expected that Islamic achievements in architecture should have been passed on. Nor, in fact, is any of this news: as Darke points out, Christopher Wren identified what he called the “Saracen” influence on the misnamed “gothic” style 300 years ago.

Motivated by a desire to counter the culture wars that attach themselves to architecture – there are Twitter feeds that pump out photographs of beautiful European buildings in order to make some point about racial supremacy – Darke feels the need to restate Wren’s argument. Not that she wants to make any claims for superiority of one over another. As she points out, the influences sometimes went the other way, for example from Rome via Byzantium to the Arab world.

“My aim is not to denigrate European architecture and its many brilliant achievements,” she writes. “My purpose has been to show that no one ‘owns’ architecture, just as no one ‘owns’ science.” (Nor, one could say, the tabbiness of cats.) Which reasonable point, I’m sure, will not be enough to stop a torrent of rage from some quarters. But for most sane people her book is a useful reminder of the interconnectedness of civilisation.