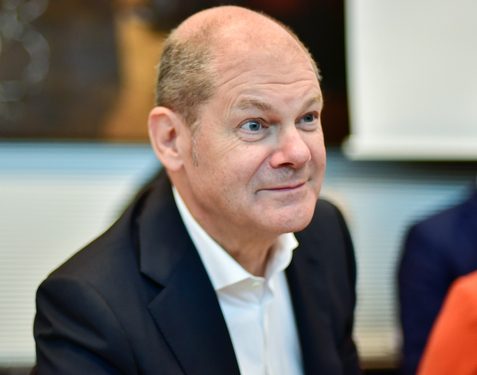 Berlin, 2019-09-24: SPD candidate for chancellor, Olaf Scholz, pictured at a meeting in Berlin

The Sunday debate, the first of three to be held before the elections, was unusual in that it featured three contenders, rather than the usual dual format, and also in that it was the first debate in 12 years that did not pit an incumbent chancellor against a challenger.

Chancellor Angela Merkel has already announced she would be bowing out of politics and retiring after 16 years in office. Her successor Laschet, however, is facing a downward trend in the polls after an incident in which he was filmed laughing during the devastating floods in his home state of North Rhine-Westphalia, where he serves as premier.

Baerbock is also fighting a slide in the polls after a series of gaffes, after her party briefly overtook the CDU following the announcement of her candidacy. A Sunday INSA poll put SPD in first place with 24% support, its best result in years, while CDU dropped to 21%, its worst result for an INSA poll. The same poll put the Greens at 17%.

In the debate, the three candidates clashed on the state of the German military, the Bundeswehr, their plans to combat climate change and their planned tax reforms. Laschet accused Baerbock of planning to “shackle industry” and then telling it to “run faster”.

Baerbock, in turn, accused her competitors of not having a plan to tackle the climate crisis. She promised to ban sale of internal combustion engines in Germany by 2030, and to mandate placing solar panels on roofs of all newly-constructed buildings.

A flash Forsa poll held after the debate indicated 36% of responders believed Scholz emerged as a winner, with 30% seeing Baerbock on top, while 25% believed Laschet was the superior candidate.

In federal polls held prior to the debate, Scholz remains the most popular choice for chancellor. Around 31% of the voters said they would prefer Scholz as the chancellor, making him more popular than his party. Baerbock is the second most popular candidate, receiving 14% support, while only 10% of German voters would like to see Laschet as the next chancellor.