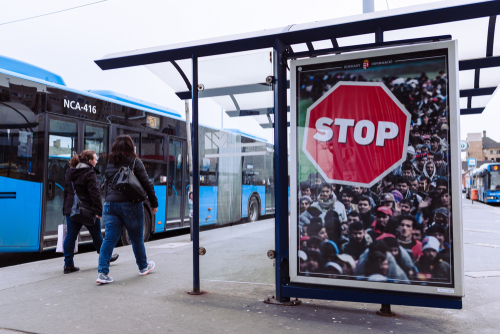 Brussels (Brussels Morning) A Madrid court rejected a complaint against an electoral campaign billboard of the far-right Vox party, which portrayed a migrant teenager in a disparaging manner while also manipulating statistics in an apparent attempt to stoke anger and resentment against migrant youth.

Using the term “mena”, the Spanish acronym for “unaccompanied foreign migrant minor”, the billboard falsely implied that the state spends 4,700 euro per month on each migrant minor, compared to only 426 euro on “your grandmother’s pension”. The billboard contrasts an elderly lady and an older teenager, dark-skinned, wearing a camo-pattern bandana, with his eyes pixelated. “Protect Madrid – vote for safety,” the slogan on the far-right billboard urges.

Claiming that the poster was intended to spread prejudice against youth migrants, the public prosecution filed a complaint with the Madrid Provincial Court, with the backing of the Spanish Socialist Party (PSOE), which currently holds power on the national level. The complaint argued that the billboard deliberately misrepresented migrants as “hooded and masked” in order to associate them with criminals.

The Madrid court rejected the complaint and refused to order the removal of the billboard. It ruled that it merely featured an “election slogan”, and that it did not present ideas that merited being removed from public spaces, taking into consideration the existence of many other examples deemed acceptable while being “just as critical or worse”.

As reported by El Pais, the court found the poster fell within the acceptable range of legitimate political ideologies. The decision emphasised that it did not constitute a crime, despite being critical, and that such would only have applied had its goal been to threaten, injure or belittle.

The Madrid regional election that prompted the billboard was ultimately won by the centre-right Popular Party (PP) in May,although its candidate, the party’s rising star Isabel Díaz Ayuso, had to form a coalition with Vox in order to remain in power.