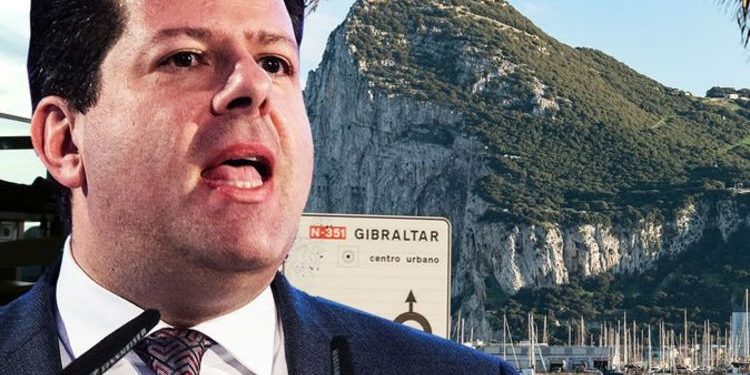 SPAIN will never succeed in driving a wedge between Gibraltar and Britain, regardless of the outcome of the ongoing UK/EU trade deal negotiations, a senior minister in the British overseas territory’s Government has said.

However, Minister for Economic Development Sir Joseph Bossano stressed he was working on the assumption the UK will reach the end of the Brexit transition period on December 31 without an agreement – and said the Rock was already prepared for such an eventuality. Sir Joseph, himself a former Chief Minister of Gibraltar, was speaking after comments by Tory MP Andrew Rosindell, chairman of the British Overseas Territories All Party Parliamentary Group, who told Express.co.uk last week Gibraltar needed to “stick as closely to Britain as possible” rather than seeking “separate ties with Britain”.

This is turn prompted a spokesman for the Gibraltar Government to tell Express.co.uk a “purist interpretation” of Brexit which did not offer a “differentiated solution” would leave the Rock a “sitting duck” for Spain.

In a lengthy statement issued today, Mr Bossano said: “Following the recent comments by Andrew Rosindell MP, a member of the All Party Parliamentary Group, and long-standing friend and defender of Gibraltar, in relation to Brexit, there have been concerns expressed publicly as to the effect on Gibraltar’s Economic Development if there is a no deal result in the Brexit talks.

“As Minister for Economic Development, I wish to reassure our people and remind them that in 2019 General Election I described the post-Brexit National Economic Plan as a strategy for Gibraltar’s Economic Development for the next four years precisely on this assumption, namely that there would be a no deal Brexit for us, even if there was a deal done with UK, by the EU.”

Sir Joseph added: “I do not know what the term ‘a purist Brexit’ is intended to convey but if the terminology means leaving without a deal, that is what we prepared ourselves for in 2019.

“In fact since the 2016 referendum I have consistently, on a number of occasions, publicly argued that there was a very strong probability that there would be a no deal result in the negotiations, given the position the EU had adopted from day one which appeared to require the UK to abandon the objectives they had wanted to achieve by leaving the EU.”

As the end of the year draws closer, there is still no guarantee UK chief negotiator David Frost and EU opposite number Michel Barnier will strike a deal, Mr Bossano said.

The situation had been complicated by the onset of the coronavirus pandemic, which has triggered a global recession and which has, for example, cut economic output in the UK by 20 percent, with similar reductions in other European countries, he added.

Sir Joseph said he remained confident the pandemic would not impact on Gibraltar’s National Economic Plan.

However, he warned the crisis would inevitably have an impact on the future size of its economy and on Government revenues.

Indeed, he stressed the damage caused by the pandemic would have a “more severe and longer lasting” effect than would leaving the EU without an agreement on a new relationship.

He explained: “Our land frontier with Spain since 1986 has been an external border for goods, because we negotiated terms in 1972, not being in the custom union for example, which are unlikely to be available to us now.”

There was no reason why Gibraltar should not have “fluidity” at the external border of the EU, any more than any other non-member country has it, Mr Bossano said.

However, he added: “Having said that, we need to remember that we have been members of the British family of Nations for 316 years and associated with the EEC/EU in the last 47.

“If at any point it emerges that a new relationship with the EU requires us to choose between the two, the wedge that worries our friend Andrew Rosindell, the choice is simple, we stick with our family.”

Gibraltar’s Chief Minister Fabian Picardo gave an indication of the unique position the Rock is facing in a tweet yesterday in which he described as “silly” the suggestion, voiced by an unnamed source speaking to Spanish newspaper El Pais, that the issue could “cleave” Gibraltar from the UK.

He added: “Not going to happen. But it will require a complex & different deal with the EU for #Gibraltar.

Gibraltar has been in British hands since the Treaty of Utrecht in 1713.