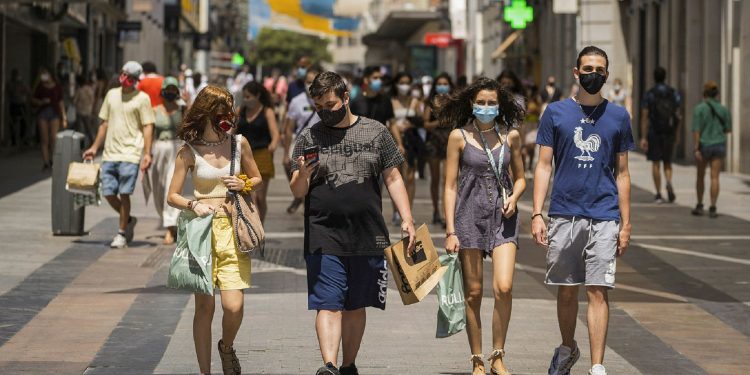 As officials across Spain wrestle with a surge in coronavirus cases, a chorus of voices is warning that another lockdown could have dire consequences for a country that just months ago emerged from one of Europe’s strictest confinements.

While cases of the virus have climbed across Europe, Spain has led the pack in recent days. More than 78,000 cases have been detected in the past two weeks, pushing the 14-day infection rate to 166 per 100,000, compared with 67 in France and 22 in the UK.

The steady rise has raised the spectre of fresh lockdowns in the coming weeks, particularly in Madrid where unions have warned that the primary care system is “on the edge of collapse”, due to a lack of staff and testing resources.

“If things continue as they are going, we’ll probably have to return to some sort of confinement, at least partially,” José Felix Hoyo Jiménez of the Spanish non-profit Médicos del Mundo told the broadcaster TeleMadrid on Monday. While the recent rise had been steady, it was likely to be less pronounced than what the country experienced in March and April, he added.

Officials across Spain have at times resorted to specific or partial confinements – earlier this month ordering the central town of Aranda de Duero into lockdown and recently ordering the closure of all restaurants and bars in the town of Tielmes near Madrid – but have emphasised measures aimed at curtailing social activities.

In Madrid, where the 14-day infection rate has soared to 366 per 100,000, authorities recommended on Friday that residents in the hardest-hit areas of the capital remained in their homes.

Enrique López, a regional official, widened this call on Monday, urging residents to avoid “unnecessary social interactions” as much as possible. “We’re in a very difficult moment – like everywhere in the world – and we have to make sacrifices. If we avoid unnecessary interactions, we avoid confinement,” he told the broadcaster Cadena Ser.

Spanish officials have suggested increased testing may partly explain the rise, adding that the majority of new cases are among people under the age of 65. The number of coronavirus deaths remains relatively low, at 96 in the past seven days.

As public health experts say the country is at a critical moment, the associations representing businesses across Spain have warned that their members continue to reel from a lockdown that ground the economy to a near halt and triggered one of the deepest recessions in recent memory. “A new confinement that would paralyse business activity would have catastrophic and irreversible consequences,” the country’s main business lobby, CEOE, said in a statement.

Psychologists have also sounded the alarm, pointing to the many in Spain who continue to grapple with the impact of a lockdown that initially barred residents from leaving their homes to walk or exercise and which forced most children to remain in their homes for six weeks.

One study looking at children in Spain and Italy found that 86% of parents surveyed reported changes in their children’s emotional state during the lockdown, ranging from difficulty concentrating to irritability. The changes appeared to be more pronounced among children in Spain, suggesting the stricter lockdown might have played a role.

Adults also continued to struggle with the impacts of the lockdown, said María Rosario Gomis Ivorra, a psychologist who specialises in emergency care. “We’ve seen a lot of depressive episodes,” she said, “lots of anxiety and anxiety-related disorders.”

She worried another confinement would exacerbate these issues. “It would be awful. We haven’t recovered from the first one, our reserve of resilience is still worn down,” she said. “Not just awful, it would be more perilous than the first time. The disorders would be more serious.”