Spain to build emergency camps for 7,000 in Canaries 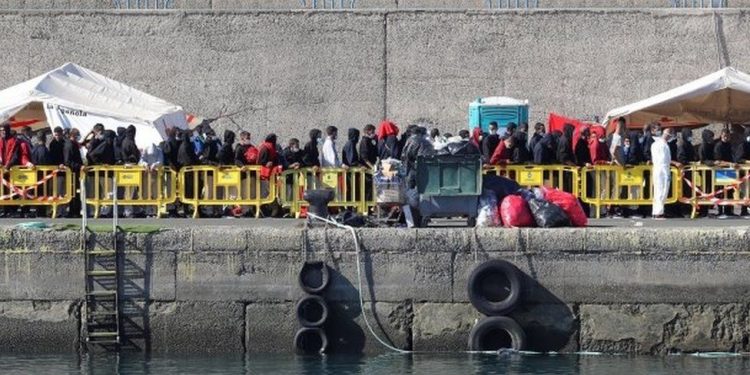 Brussels (Brussels Morning) The Spanish government has announced plans to set up emergency camps for some 7,000 migrants in the Canary Islands in response to significant increase of arrivals there, RFI reported Friday.

In addition, the government plan includes strengthening local sea search and rescue teams as well as mounting a diplomatic offensive to tackle the crisis in the Canaries, where more than 12,000 people have landed in the last two months or so.

Spanish Minister of Inclusion, Social Security and Migration, José Luis Escrivá presented the plan at a press conference after talks in Gran Canaria with regional officials, who called for immediate government intervention and warned the island’s migrant services are overwhelmed.

Emergency encampments and tents for some 7,000 should be erected in the coming weeks, Escrivá said. He pointed out that this was a temporary solution and that the government is preparing a more stable setup for processing arrivals.

He noted the stable solution will include the use of other facilities, largely military, with the cost of the plan estimated at approximately 84 million euro, to come from EU funds. Some 5,500 migrants are currently housed in tourist accommodation, largely vacant because of the coronavirus pandemic, and an additional 1,000-plus are at the port of Arguineguín, which is overwhelmed.

The emergency plan should help local authorities to rehouse these migrants.

The camp at the port of Arguineguín was originally built to process arrivals as well as to conduct virus tests, but has been over-run to the point where the authorities have had to move hundreds of people to a temporary camp set up by the military near Las Palmas.

So far, in 2020, more than 18,000 migrants have landed in the Canaries, a ten-fold increase compared to 2019. The number began spiking after the EU concluded deals with Libya, Morocco and Turkey to curb the flow of migrants through popular routes to the bloc.

Speaking at the press conference, President of the Canary Islands Ángel Víctor Torres called on the government to move the migrants to mainland Spain as soon as possible, stressing that the archipelago is overwhelmed. We cannot take in all the migrants that reach Spain, Torres said.

Commenting on the situation in the Canaries earlier, Spain’s Minister of Defence Margarita Robles criticised the government’s approach as inadequate, pointing out that conditions at the Arguineguín camp were “not suitable for human beings.”

On Friday, Spanish Interior Minister Fernando Grande-Marlaska met with his Moroccan counterpart Abdelouafi Laftit in the Moroccan capital of Rabat.

They discussed ways to stem the flow of migrants in countries of origin and to relieve the pressure on the Canaries. Grande-Marlaska said the two agreed on measures aimed at fighting illegal migration and human trafficking.