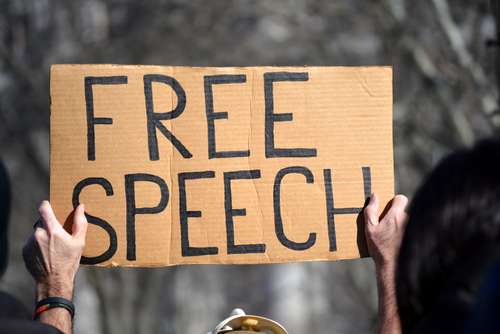 Brussels (Brussels Morning) The Spanish government has announced it is to reform the criminal code with a view to removing jail sentences for crimes involving freedom of speech issues, El País reported on Wednesday.

The move comes in the wake of the public outcry over the Supreme Court’s confirmation last month of the prison sentence for rapper Pablo Hasél, who had voiced his support for terrorism and insulted state institutions and the monarchy.

More than 200 artists signed a petition in defence of the rapper, stressing that his imprisonment “makes the sword hanging over the heads of all public figures who dare to openly criticize the actions of state institutions all the more evident.”

“We are aware that if we allow Pablo to be jailed, tomorrow they could come after any one of us, until they have managed to stifle any whisper of dissidence,” the petition warns.

Hasél was convicted for posting 64 messages between 2014 and 2016, in one of which he expressed support for left-wing terrorist Victoria Gómez. The rap artist stated that protests are not enough and advocated “support [for] those who took things further.” In other posts, he accused King Felipe VI and his father Juan Carlos I of homicide and embezzlement.

In March 2018, Hasél was sentenced to two years and one day in prison, a sentence the courts later reduced to nine months and a day, stressing that the posts did “not pose a real risk” to anyone.

The rapper had previously been sentenced to prison terms for assaulting a journalist, resisting the police, breaking and entering, attacking a witness at a trial and praising terrorist attacks. However, he did not serve the jail terms.

The left-wing Unidas Podemos, a part of the ruling centre-left coalition, is resisting the crackdown on freedom of expression and wants to see statements that, for example, insult state institutions and the Crown, or insult religious feelings or glorify terrorism, decriminalised.

While the Ministry of Justice has announced it is reforming the regulation that applies to the glorification of terrorism and blasphemy, it is also stressing the need to tread carefully when it comes to sensitive issues of fundamental rights. Drawing the line between the exercise of fundamental rights and allowing criminal behaviour is a difficult and delicate exercise, it noted.