SpaceX spacecraft on its way back to Earth 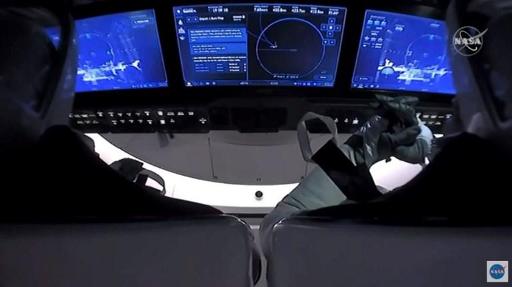 The SpaceX vessel, Crew Dragon, is expected to land in the Gulf of Mexico at about 8.48 pm Belgian time on Sunday, after leaving the International Space Shuttle (ISS) for Earth, the U.S. space agency NASA reported.

The spacecraft undocked on Saturday from the ISS with U.S. astronauts Bob Behnken and Doug Hurley on board. Their return, the first crewed U.S. flight since 2011, is being covered in real time on Twitter and on NASA’s TV feed.
.
The astronauts “are about to wake up for the last leg of their trip home, which will end with them splashing down in the Gulf of Mexico at 2.48 pm ET (8.48 p.m. Belgian time),” NASA tweeted at about 7.30 a.m. on Sunday.

Nasa has also been closely following the progress of Hurricane Isaias, which slammed into the Bahamas on Saturday night and is heading for the coast of Florida. Should the winds be too strong or the waves too high, that could complicate the vessel’s landing at sea as well as its recovery by ships already positioned there.

Behnken and Hurley became the first U.S. astronauts to be sent to the ISS, located 400 km from the Earth, by a private company under a contract with NASA. The launch of the Crew Dragon also marks the first crewed U.S. flight since 2011, when US space shuttles were withdrawn.

Since then, Americans had been travelling on board Russian vessels.

NASA commissioned SpaceX, which has been ferrying cargo to the ISS since 2012, to develop a new space taxi. SpaceX promised the U.S. space agency six return flights to the ISS with four astronauts on board for three billion dollars, under a fixed-price contract concluded in 2011.