South Africa registers more than half a million coronavirus cases 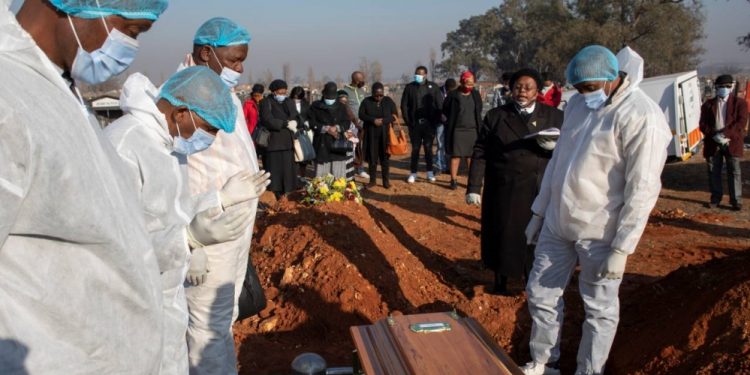 South Africa has registered more than half a million confirmed cases of Covid-19, health officials have said, as the government struggles to retain public trust amid allegations of widespread corruption, arbitrary decisions on restrictions and administrative incompetence.

Africa’s most industrialised nation was widely praised for its early response to the pandemic but criticism has since mounted as a strict lockdown was eased.

“The lockdown succeeded in delaying the spread of the virus by more than two months, preventing a sudden and uncontrolled increase in infections in late March,” the South African president, Cyril Ramaphosa, said on Saturday evening in the latest in a series of televised speeches to the nation.

As restrictions have eased, infections have risen quickly, with some observers questioning decisions to allow the crowded minibuses that provide most public transport to operate and to permit religious services. A ban on smoking and drinking has also been controversial.

In recent days, several prominent officials from the ruling African National Congress, including Ramaphosa’s spokesperson, have been suspended or forced to step down temporarily following graft allegations. More than a hundred contracts for procurement of protective equipment and other vital supplies are under investigation in Gauteng province, the economic heart of South Africa, and its worst-hit area.

David Makhura, the leader of Gauteng province, told journalists on Thursday that the allegations of corruption had “profoundly eroded public confidence in the government … and undermined the work done by or health workers in the fight against Covid-19”.

Just over 3 million people have been tested for the virus in South Africa, which confirmed its first case five months ago, and 8,153 deaths have been recorded.

Although testing levels have varied, the daily increase in infections appears to be stabilising in the badly-hit Western Cape, Gauteng and Eastern Cape provinces.

The World Health Organization’s top health emergencies expert, Mike Ryan, last week warned that South Africa’s experience gave a glimpse of what was likely to happen across the continent.

There are almost 950,000 confirmed cases in Africa, though most experts agree inadequate testing means these are only a fraction of the total number of people who have contracted the virus. There have been about 20,000 deaths.

The difficulty – if not outright impossibility – of social distancing in Africa’s poor, tightly packed urban areas, has been an enabler for the spread of the virus. Harsh curfews inflict massive suffering on the very large number of people who do not have regular incomes but rely on day-to-day earnings to pay for basic necessities.

South Africa’s health system, weakened by years of underfunding and mismanagement, has come close to being overwhelmed.

In his speech, Ramaphosa sought to reassure South Africans, saying the government continued to mobilise additional facilities, equipment and personnel in provinces still experiencing an increase in infections.

A “National Ventilator Project” is expected to deliver 20,000 locally produced, non-invasive ventilators to where they are most needed in South Africa in coming weeks, the president said.