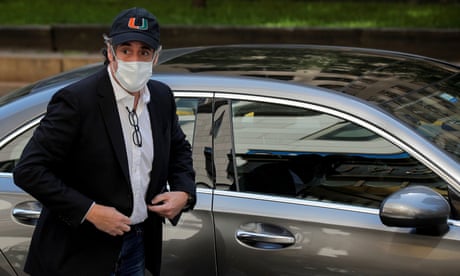 A teaser for Michael Cohen’s book about his time as Donald Trump’s lawyer and fixer and his fall from grace was released on Thursday, after the US justice department had issued a gag order to stop the book’s publication that was later dropped.

The book, entitled Disloyal: The True Story of the Former Personal Attorney to President Donald J Trump, is slated to be released sometime in September, ahead of the presidential election in November.

Cohen ginned up pre-sales and tweeted about it on Thursday.

In the book’s foreword Cohen, 53, mentions writing in his federal prison cell in upstate New York in his green inmate uniform.

He details his feelings of bewilderment at falling foul of the president of the United States after years of being “Trump’s first call every morning and his last call every night”.

“In some ways, I knew him better than even his family did because I bore witness to the real man,” he writes, calling Trump a con man, a predator, a racist, a bully and a liar.

In his cell, Cohen was about a year in to serving a three-year sentence on federal charges of tax evasion, making false statements, lying to Congress and facilitating illegal payments to silence women about their alleged affairs with Trump in the past, which the president denies. But Cohen was released in May after fears of Covid-19 spreading in federal prisons.

After tweeting that he was nearly finished with his book in July, Cohen was sent back to prison. The ACLU ended up joining a lawuit on his behalf to get him out, saying he was being retaliated against by the authorities, which was ultimately successful. A gag order from the justice department to halt the book’s publication was also dropped.

In the forward to the book, Cohen writes: “My insatiable desire to please Trump to gain power for myself, the fatal flaw that led to my ruination, was a Faustian bargain: I would do anything to accumulate, wield, maintain, exert, exploit power. In this way, Donald Trump and I were the most alike … soulmates.”

Cohen describes driving to Washington DC, from his home in New York ready to testify to Congress during the Trump-Russia investigation, and being terrified that someone would try to kill him, which was why he didn’t go by plane or train, after receiving hundreds of death threats for turning against the president.

“I was wearing a baseball cap and sunglasses and I kept the speedometer at 80, avoiding the glances of other drivers,” he writes.

He also says that he had a panic attack and sobbed before testifying. Addressing Congress in February 2019, he accused Trump of criminal conspiracy and said Trump, when he was the Republican candidate in 2016, was aware of the infamous Trump Tower office meeting in New York between members of his presidential campaign, including son Donald Trump Jr, and a Russian lawyer with ties to the Kremlin, in order to receive damaging information about Hillary Clinton.

In his book foreword, he warns: “In these dangerous days, I see the Republican party and Trump’s followers threatening the constitution – which is in far greater peril than is commonly understood – and following one of the worst impulses of humankind: the desire for power at all costs.”

The Trump administration has tried and failed to stop some high-profile tell-alls. A damning book by the former national security adviser John Bolton, The Room Where It Happened, was published in June, while the excoriating and personal book Too Much and Never Enough, by Trump’s niece Mary L Trump, was published in July.