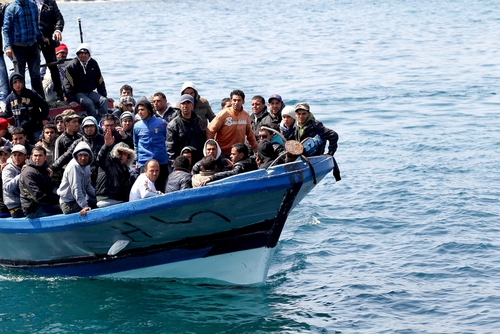 Brussels (Brussels Morning) The humanitarian vessel Ocean Viking rescued five boats in distress off the coast of Libya on Saturday, most likely saving the lives of 196 on board, who had risked the daunting Mediterranean route in a bid to seek asylum in the European Union.

According to the ship’s operator, the NGO SOS Méditerranée, information on the vessels in distress had been relayed to the ship via the international reconnaissance aircraft, Seabird, which is operated by the German NGO Sea-Watch and had been conducting search operations on the route between Libya and Italy.

In the morning, the Ocean Viking crew rescued a group of 57 migrants, who had been sailing towards the north in an inflatable dinghy. In the afternoon, two more groups of migrants were rescued – 54 attempting the passage in another dinghy, and 64 in a wooden boat. The final rescue involved 21 people, also aboard a wooden boat. All told, there were at least two pregnant women and 36 minors among the rescued groups. According to the SOS Méditerranée, at least 22 of the children were unaccompanied

Between Saturday night and early Sunday, the Ocean Viking rescued yet another large group, this time some 400 migrants who had embarked on a large wooden boat that then proceeded to take on water.

The dangerous sea route between Libya and Italy has accounted for the loss of at least 1,146 lives this year so far, according to the International Organisation for Migration. Actual figures are thought to be probably much higher, since many fatalities are believed to go unnoticed and unreported.

A former support vessel for oil rigs in the North Sea, Ocean Viking was refitted in 2019 to serve as a search and rescue ship for the French-based NGO. The ship operates under the Norwegian flag. The Oslo government openly supports the vessel’s Mediterranean search and rescue mission.

Italy’s authorities, on the other hand, have a history of clashes with the independent migrant rescue organisations operating in the area. They have accused them at times of assisting in people smuggling. In July 2020, Italy impounded the Ocean Viking for five months, for “technical reasons”.

The EU and its border monitoring agency Frontex have been financing the Libyan coast guard in an effort to prevent migrant ships from reaching the bloc’s territory. Amnesty International has claimed that the Libyan coast guard is regularly negligent and abusive. Migrants returned to Libya are immediately funneled into arbitrary detention, where they face torture, sexual violence and abuse.