Soldier Hiroo Onoda does not surrender 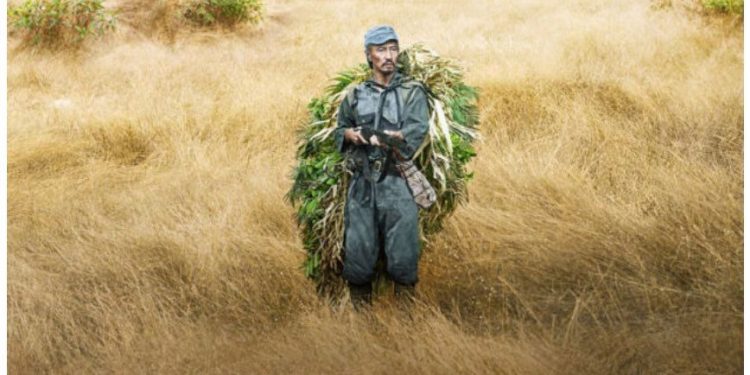 Rome (Brussels Morning) Onoda – 10,000 nights in the jungle by director Arthur Harari, is released in cinemas after a run at Cannes in the Un Certain Regard category.

About the unexpected success and the Green Pass

Everyone had their fingers crossed for the French première screening of Onoda – 10,000 nights in the jungle: first of all, the young director Arthur Harari, then all his collaborators and above all the international producers. The French screening of the film, scheduled for the second week of August, clashed with the counter-revolutionary protest against the mandatory health pass, which made hundreds of potential spectators desist from going to the cinemas. The drastic drop in admissions sales immeasurably undermined the mammoth investment in the film and deprived moviegoers, in spite of themselves, of a cinematic moment of the highest order.

An epic, important, dense and profound film, involving numerous and heterogeneous aspects of the history of the Second World War (and beyond), but above all of human existence, through the memory of the figure of the “ghost soldier”, who actually existed, Hiroo Onoda (Kainan, 19 March 1922 – Tokyo, 16 January 2014). The Japanese soldier enlisted at a very young age and was quickly co-opted into a special corps dedicated to the Secret War. In 1944, he was sent as the leader of an anti-American expedition to the Philippine island of Lubang, with a single, peremptory imperative: never surrender.

Enveloped by the inhospitable and savage island conditions, hunted by premonitory symptoms and the enemy’s threats, but supported by an unshakeable faith that infected his fellow soldiers, Onoda resisted the bloody attack of 28 February 1945 with courageous determination. Retreating and hiding in the mountains with three fellow soldiers, he does not know, does not realise, and does not want to realise, that the war is over.

From that moment on, his personal war begins: an intimate, inexplicable resistance, a fascinating adventure, as feverish as it is disturbing, that lasts almost thirty years. Accompanied by his granitic creed, he convinces his companions to continue the mission, hoping to soon uncover and annihilate the American enemy, even when the megaphones of the Japanese government strongly urge them to abandon the island and their dangerous status as fugitives.

Believing in a conspiracy, Onoda turns into a paranoid deserter, finding new enemies to fight in the unwelcoming inhabitants of Lubang. Increasingly hostile to the raids of the military, the natives in turn engage in a manhunt that forces some of them to leave the island or die there. All except Onoda, who, alone and unaware, continued his personal battle until 1974. Found, after a long and perilous search, by Norio Suzuki (identified in the film as a curious tourist), Onoda capitulates thanks only to the moving and pitiful intervention of Major Taniguchi, who had confided in him, during the dark years of World War II, his secret mission on behalf of the Japanese imperial government. The almost impossible reintegration, after a peculiar thirty-year existence, affects the irreducible Onoda, who bears witness to his exploits in his autobiographical novel No Surrender: My Thirty-Year War (1975).
Thanks to a powerful and adventurous narration, worthy of the novels of Conrad and Stevenson, and to a complete visual and auditive immersion in the wild nature of the Philippine island, the film retraces rather faithfully, with complete passion and in almost three hours of projection, the events of Onoda, and his slow and inexorable path towards a difficult and unawovable awareness. With an old-fashioned cinematic spirit, faintly disturbed by some necessary digressions and incursions into the present time, between temporal flashbacks, real pearls that set the film like a precious gem, Onoda – 10,000 nights in the jungle is preparing to be much more than a work worthy of Un Certain Regard.