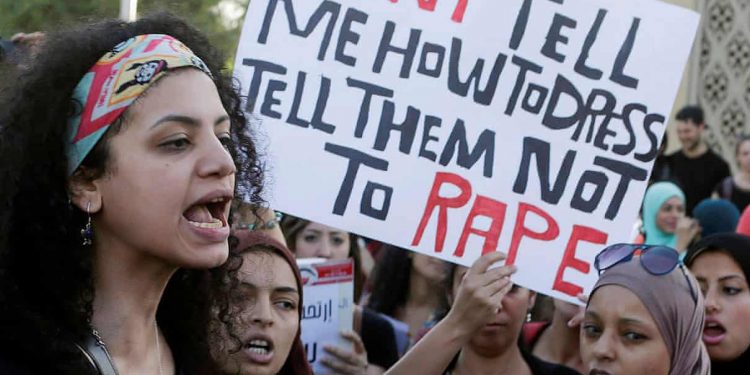 Egypt is witnessing a wave of online outrage targeting rape culture and sexual assault, as survivors use social media to shame alleged abusers and demand change.

“Right now the only way to fight this issue is online and through these social media pages,” said Ahmed, a Canada-based administrator of the Instagram account “harassers of Cairo”. The Guardian is choosing not to give his full name. “There’s corruption; if your father is wealthy and powerful you get away with things very easily. Online is the only way right now.”

Campaigners and feminist activists say Egyptian law provides limited recourse on matters of sexual assault and harassment, and that survivors face an uphill struggle to report such experiences, as well as social consequences.

Despite recent changes including a draft law to anonymise survivor testimony in court and new methods to submit testimony electronically to Egypt’s public prosecution office, observers say there is still far to go before survivors feel comfortable reporting their experiences to police, or routinely see alleged accusers brought to justice.

More than 99.3% of Egyptian women and girls surveyed in 2013 reported experiencing some form of harassment.

Even as the Egyptian authorities shifted their stance on reporting sexual assault, eight female TikTok influencers were arrested between April and July charged with “immorality”, “debauchery” and “violating Egyptian family values”. Two, along with their three assistants, received two-year prison sentences and a £14,360 fine for human trafficking charges.

One influencer was arrested along with her alleged attackers, and accused of “promoting debauchery” after stating on TikTok that they sexually assaulted her.

She was charged with “immorality, debauchery and violating Egyptian family values”, like the other influencers. The prosecutor mandated her to spend a period of pre-trial detention in a social rehabilitation centre for abused women, where she is prevented from leaving the premises.

Her attackers were referred to a criminal trial, charged with a variety of offences including kidnapping with fraud and coercion, kidnapping and rape and others including assault by force, violation of personal privacy through publishing online content. One of the men has admitted rape, according to police investigators.

“It’s clear the state and society are saying that there are some ‘good women’ worth protecting, from a patriarchal perspective, and there are ‘bad women’ like these women on TikTok,” said Mozn Hassan, the founder of the Cairo-based organisation Nazra for Feminist Studies. She pointed to examples of the authorities arresting feminist activists and targeting NGOs such as Nazra, which includes a travel ban for Hassan herself.

Meanwhile the social media activism has provoked rare results, even from conservative institutions. “I thought I’d done everything possible quietly and privately, respectfully and patiently – all of that didn’t work. Going public was my only other option,” said Sally Zakhari, who used social media to share her account of sexual abuse perpetrated by Reweiss Aziz Khalil, a Coptic priest from a diocese in Egypt’s south now based in the US. She said the abuse took place when she was about 12 years old.

Zakhari waited six months after an internal report on Khalil’s conduct was delivered to the Coptic pope, Tawadros II. Hearing no further action against Khalil was likely, she shared her story online.

The resulting outcry led the Coptic church to defrock Khalil via a papal decree in July, after he was defrocked in 2014 but continued to practice. Tawadross II cited Khalil’s “repeated infringements that are unacceptable to the priesthood”. A clerical council headed by the influential bishop of Minya in Egypt’s south reiterated that Khalil was suspended from his position and should return to Egypt for further investigations. Zakhari said the church’s response was insufficient and more survivors would come forward.

A groundswell of online anger also led to the arrest of an accused rapist, Ahmed Bassam Zaki, last month. Testimonies gathered by an Instagram account called “assaultpolice” accused Zaki, a 22-year-old from an elite family, of raping and harassing more than 100 women, including girls as young as 14.

Zaki was charged with the attempted rape of three women, including one under the age of 18, indecent assault, sexual harassment and using social media to harass women. Prosecutors said that during the investigation he confessed to some of the charges against him, including blackmail and intimidation, but he has denied the more serious charges of sexual harassment and rape.

“Assaultpolice” continued to gather testimony, focusing on six wealthy men accused of gang-raping underage women in a central Cairo hotel. In early August, Egypt’s public prosecutor opened an investigation into allegations the men drugged and raped an 18-year-old woman in 2014, after she provided testimony via the governmental organisation the National Council for Women. The council said it demanded the investigation due to allegations that surfaced online.

But administrators of the Instagram account said they were forced to close it due to threats. This led others, including Ahmed, to start at least four other accounts to continue the campaign.

Ahmed said he was running one of his Instagram accounts with two male friends, after the group grew concerned that few men were assisting Egyptian women speaking up about harassment. “I don’t think there’s a lot of guys helping with this issue so we started a page for that,” he said.