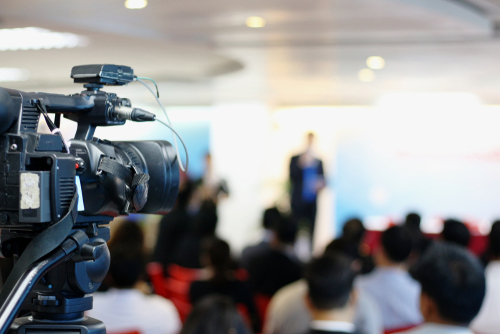 The media is recording video during the press conference. Journalists are interviewing, with the cameraman recording News agencies come together to make news.

Brussels (Brussels Morning) The Slovenian national press agency, the STA, has barely enough funds left to pay out a single paycheck to its employees, after the Slovenian government has suspended payments from the state budget.

The STA normally receives government funding to finance its operations, pay its journalists and provide a regular news service to other media in the country. However, it has not received any funding for more than 235 days now.

Its troubles started with the coverage of the meeting between Slovenian Prime Minister Janez Janša and his Hungarian counterpart Viktor Orbán, on 14 October 2020. The Slovenian PM was openly upset with the agency’s article on construction of a power line connecting Slovenia, Hungary and Croatia.

Janša denounced STA as a “national disgrace” over the fact that the article about his meeting with Orbán was shorter than an interview with a prominent Slovenian rapper and anti-government activist, Zlatko.

Janša’s government soon issued a decree, suspending payments to the agency, and drawing ire from the opposition and press freedom watchdogs. The decree was struck down by the country’s courts in December last year, but the funding has not resumed, as the government appears to be stalling and refuses to engage with the STA.

Facing criticism from the EU, Janša’s government last proposed to resume the funding by issuing a new decree and offering a new contract to the agency, which was rejected by the STA, which claimed it would interfere with the editorial policy.

The government envisioned a funding model in which the agency would only be paid for content deemed to be a “public service”, as determined by the government communication office UKOM on a monthly basis. Agency editor-in-chief Barbara Štrukelj noted the move would make UKOM both an accounting agency and a content censor.

Speaking to DW, Štrukelj said the agency now has the funds to pay its employees one more round of wages, before the funds collected in a public fundraising campaign in the spring run out. The money which the agency needs to stay afloat, around two million euro, is already set aside in the state budget, but the STA has not yet received any of it. According to Štrukelj, the government is repeatedly attaching various conditions to the money, while the agency is slowly suffocating in full view of the public and the EU.