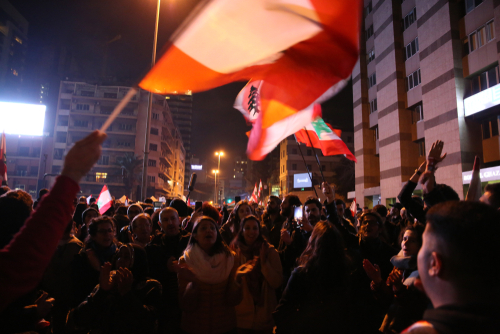 Brussels (Brussels Morning) At least six people were killed in Beirut on Thursday as armed clashes erupted during a protest against the lead judge tasked with investigating last year’s deadly blast in the city’s port.

Groups fighting along a former front line from the 1975-1990 civil war used pistols, automatic rifles and rocket-propelled grenades, in the deadliest exchange of fire in Lebanon’s capital seen in years.

The initial protest was organised by the Hezbollah militant group and its allies, demanding the removal of Tarek Bitar, the lead judge investigating the 2020 port explosion in Beirut, when more than 200 people were killed and several city districts were levelled completely.

According to Hezbollah, the protesters came under fire from snipers placed on rooftops. AFP journalists report seeing the right-wing Christian Lebanese Forces mobilising in response to the protest organised by the Islamist, Iran-backed Hezbollah.

Gunmen opened fire on the protesters, with the army soon intervening in force and attempting to find the initial shooters, while both sides appeared to have exchanged fire. Lebanese authorities stated at least six were killed and at least 30 wounded in the clashes. Two of the injured are reported as being in critical condition. Prime Minister Najib Mikati called for calm and urged for people to resist being “dragged into civil strife”.

According to Hezbollah, Judge Bitar is deliberately singling out Hezbollah-allied politicians as he pursues his investigation into the deadly blast, despite none having been charged so far. The Shiite group is demanding that he be replaced by another judge.
In August this year, an independent report by Human Rights Watch claimed many of the top Lebanese officials had long been negligent of the danger poised by the chemicals stored in Beirut’s port. Then-PM Hassan Diab and numerous top officials were warned it could result in a deadly explosion, yet all failed to act upon it.