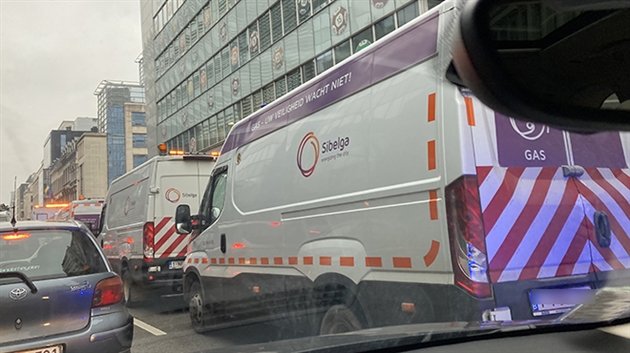 Belgium, (Brussels Morning Newspaper) Since Wednesday, the Sibelga technicians have been on strike for more pay. Just like Wednesday, a procession of Sibelga vehicles will again pass through the city today. Another meeting is scheduled for this afternoon. “Our members are prepared to continue on strike if there is no positive response.”

With the sirens on, a few dozen Sibelga vehicles still take to the streets today. The procession currently stops in the center, at the Ravenstein Gallery. On Wednesday, the Sibelga technicians protested in front of the headquarters of Brugel, the Brussels energy regulator. Today the angry staff stops in front of the headquarters of Synergrid, the employers’ federation within the sector, near the Central Station.

It is mainly the technical staff who have been on strike since Wednesday, although according to Gazelco, the trade union for the gas and electricity companies within the ACOD, part of the administrative strike would also be included.

The reason for the strike is a conflict over wages. Since 2018, Sibelga staff has been asking for wages to be equalized with those at its Walloon counterpart Ores. In Wallonia, the grid operator’s wages are higher, but they are also fixed.

“At Sibelga, an employee receives a wage via a scale that has a minimum and maximum amount, whereby in essence every employee has an individualized wage,” federal secretary of Gazelco Romain Wijckmans told BRUZZ on Wednesday. “We ask for a collective, fixed wage scale within which each employee can look up his own salary. But the management always postpones the decision on this.”

Today, the management has again invited the strikers for consultation. Unions and management meet at 1.30 pm. “Whether we continue the actions will depend on that conversation,” said Gazelco union man Olivier Renard.

“Our members are prepared to continue the actions this weekend. The strike picket (at Sibelga’s headquarters at Werkhuizenkaai, ed.) will remain in place until there is a positive response to our demands.”