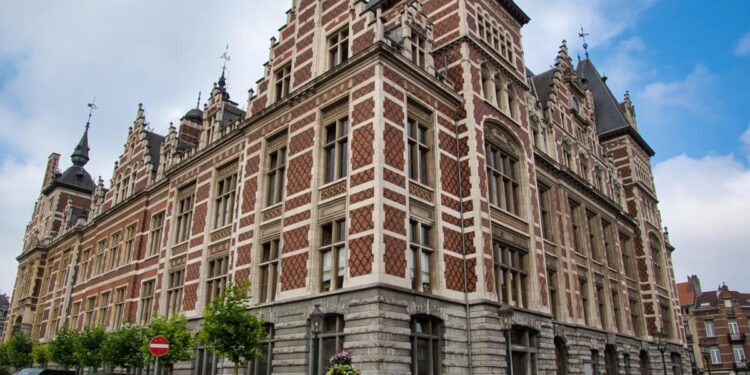 Brussels, (Brussels Morning)-  A new procedure to deal with complaints about sexually inappropriate behavior is needed. That is what Alderman Sihame Haddioui (Ecolo) said on Wednesday evening at the Colignonplein in Schaerbeek, addressing several hundred activists who expressed her support for her complaint about the sexual transnational behavior of fellow aldermen Michel De Herde (Défi).

Hundreds of people gathered in front of Schaerbeek town hall on Wednesday. They chant: ‘Michel Dehors’ and ‘Victime, on te croit’ , reported BRUZZ, the complaint of alderman Sihame Haddioui (Ecolo) about her colleague alderman Michel De Herde (Défi) falls within a broader phenomenon. Their cardboard signs bear references to #MeToo.

Kirsten Crick comes from Schaerbeek and carries such a sign. It reads ‘Sihame on te croit #metoopolitique’. “I find it unbelievable that someone who may be a victim can no longer do her job, while the other party can continue their work without any problems,” she said. Haddioui has indeed decided not to come to college as long as De Herde is there too.

Crick also emphasises the large age and reputation difference, typical of MeToo testimonials where it is often word against word. “We’re talking about a young racialized woman in her first term of office, facing a politician who enjoys enormous fame and has had a career spanning several decades.”

During the city council of October 21, 2021, De Herde is said to have made sexually explicit comments and put his hand between her thighs. “I first reported the case in December,” Haddioui told the demonstrators on Place Colignon.

“I asked the mayor if I could not change places so that I would no longer sit next to him. She complied. In February I lodged a formal complaint with the municipality, but then I was told that there was nothing they could do except exchange places.” While the investigation is still ongoing, Haddioui asks for a suspension from De Herde. In addition, she would also like to adjust the internal complaints procedure.

“The big problem for employees is that if you want to file a complaint against a colleague or ships, you have to do so with first and last names.” An anonymous complaint will only be handled when two people file a complaint. “The procedure does not focus on individual cases,” Haddioui regrets.

“The mayor and the aldermen take it seriously, but there is no suitable procedure to follow it up. Let’s think together about the internal investigation at the municipality,” she suggests. “Because that’s necessary, maybe there are other victims that we don’t know about.”

Mayor Cécile Jodogne (Défi) is interested in that. While the Schaerbeek city council tries to complete the pre-counted agenda items and ignore the slogans of the activists on the Colignonplein, it sends out a press release confirming that it too has heard rumours of complaints about the same ships.

“The municipality is investigating what additional measures should be taken so that people come to speak out who are not yet doing so,” says Jodogne, without explaining exactly how. “That way, the situation can be assessed, appropriate follow-up and targeted action taken.”

‘How should we develop this legally?’

Minister of Local Governments Bernard Clerfayt (Défi) is the title-holding mayor of Schaerbeek and therefore also present at the Schaerbeek municipal council. He sees no possibilities to temporarily suspend De Herde, as the demonstrators in the square are asking.

Changing the complaints procedure is also not so easy, according to Clerfayt. “We respond a lot to complaints, whether it concerns sexually transgressive behavior or not. We have a counsellor at the municipality who analyzes the cases completely anonymously, after which an internal investigation may follow. We did that eighteen months ago in the case of a director about whom there were many complaints.”

This is done on the basis of testimonials from several people. It is precisely this element that, according to Haddioui, makes the complaints procedure unsuitable for complaints such as hers. “Although sexually transgressive behavior is systemic, it often concerns individual cases.”