‘She gold-plated songs’: Denise Johnson, the voice of Manchester’s dancefloors 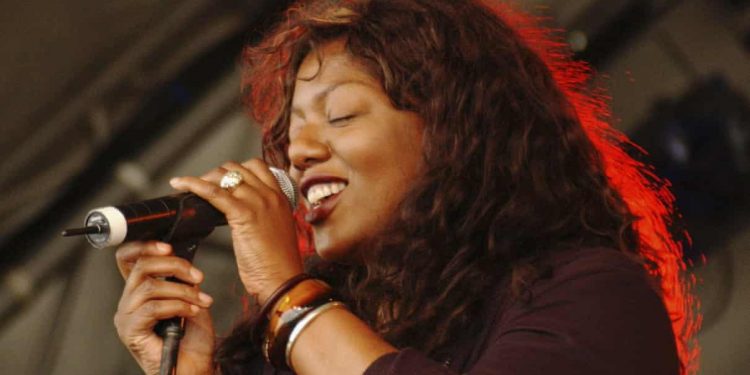 Manchester’s nostalgia industrial complex tends to privilege its white men: Joy Division and Tony Wilson are the ones to have had biopics made about them, with another about Shaun Ryder on the way. But these rightful remembrances can crowd out figures such as Barry Adamson and Rowetta: black, genre-fluid pioneers amid the city’s wildly exciting music scene in the 1980s and early 90s. Vocalist Denise Johnson, who died this week aged 56, was another of them at the vanguard.

“Even though she was a mate,” remembers Johnny Marr, “you felt it was a privilege her being on your song. She kind of gold-plated songs – you knew that the track was going to acquire a few extra gold stars.”

Born into the 1960s working-class Manchester encapsulated by the photographs of Shirley Baker, Johnson was brought up by her Jamaican mother in the shadow of the imposing modernist Hulme Crescents estate. An early passion for Manchester City had to be suppressed as a child due to fears of racial abuse on the terraces, though she would later become an enthusiastic and eloquent advocate of the club. As soon as the infant Denise was aware of singing, however, it became her life, initially schooled on an eclectic syllabus of Tamla Motown, reggae and Hollywood musicals.

Listening to Johnson’s gorgeous voice, you could be forgiven for assuming that her roots were in gospel – instead, she was shaped by the far more prosaic world of the north-west club scene, singing on the Phoenix Nights circuit as part of a four-piece cabaret act, complete with cassette backing tape. She said she was fired for being “too opinionated”, but an entirely different clubland would be waiting to claim her for its own.

In 1989, Johnson joined the British neo-soul outfit Fifth of Heaven – her velvety Just a Little More is an underappreciated cut from that time – but she grew disillusioned with the constraints of the genre. “It sounded so complacent and subdued,” she told Vox magazine in 1994. “And it had no fire. I need fire.” She guested on tracks around Manchester, with the debut single for the Creation Records rave outfit Hypnotone laying the template for a career.

Dream Beam is pretty boilerplate stuff for the time – a wide-eyed breakbeat giving way to pounding Italo piano – but the arrival of her rich vocal alchemises a so-so house track into something else entirely. Performing this track at the London club Shoom, Johnson came to the attention of Primal Scream, who had been working with the visionary DJ and producer Andrew Weatherall on a new kind of dance record. The problem was, Bobby Gillespie wasn’t a dance vocalist. It was felt that one of the more experimental tracks for the record – a lysergic collage of an old MC5 vocal scat, a chugging house beat and an out-of-tune tin whistle – needed a female vocal to lift it.

Johnson walked the Shoom audition and was soon part of the sessions for Screamadelica, which were, well, sessions – days indistinguishable from night, hard graft indistinguishable from partying. Johnson’s vocal on Don’t Fight It, Feel It would prove one of the key moments in 1990s dance music, and it’s worth noting that the two geniuses of that track, Weatherall and Johnson, have both died this year. If Weatherall was aiming at your head and your feet, then Johnson’s soaring voice went straight for the heart.

This began a five-year period Johnson would later remember as “truly magical, hair-tearing-out, raucous years”. She sang alongside George Clinton with Primal Scream on MTV; she joined the band’s famously decadent US tour with Depeche Mode. Back at home, she appeared with New Order, and their frontman Bernard Sumner’s Electronic project with Marr; Marr even wrote her into his brilliant 1993 remix of Pet Shop Boys’ I Want to Wake Up, her luxurious soulfulness counterpointed by Neil Tennant’s clipped resignation. A Certain Ratio invited her to watch them, suspecting that she was the vocalist to match their house inclinations – Johnson was initially horrified at their scratchy art-funk cacophony and turned them down. Something stuck, though, and this would turn into her most enduring collaboration, lasting 28 years.

Marr cites her soaring vocal outro to Electronic’s Get the Message as one example of how she gold-plated songs, though you could add to that list A Certain Ratio’s majestic Be What You Wanna Be, Bernard Sumner’s killer remix of that band’s Won’t Stop Loving You, and Primal Scream’s rootsy Free. Her own solo career never quite took off, but 1994 single Rays of the Rising Sun, featuring Marr on guitar, was rightfully a dancefloor hit.

Later this year, her debut solo album Where Does it Go could have provided an opportunity for a reappraisal of Johnson’s landmark contribution to dance music history, but she treated the glory years and the lean years just the same. Friends remember Johnson as a hugely warm person, one who didn’t seek fame or suffer fools gladly – as evidenced by her wonderfully acerbic Twitter account.

“She was a class singer and a class person,” says Marr, “a real no-nonsense Mancunian woman. She knew what she had was special, because everyone knew that what she had was special. You couldn’t really separate the person from the singer, really – her talent was so great and it was such a special thing, that you just relate to her, as that person who did that magic thing.” Just don’t call her a backing vocalist – Denise Johnson became the main event on everything she sang on.