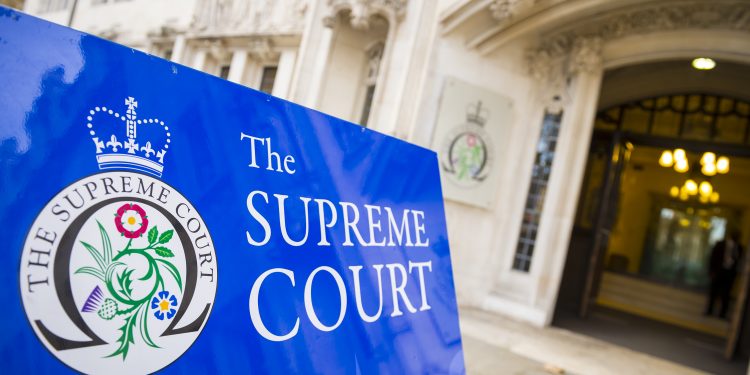 UPDATE: The Supreme Court has unanimously ruled that Shamima Begum cannot return to the UK to appeal the Home Office decision to revoke her British citizenship.

London (Brussels Morning) The UK’s Supreme Court will this morning return judgment on the appeal of Shamima Begum, a British citizen who left the UK as a minor to join terror outfit ISIS in Syria, while concern brews that denying the appeal will create security concerns for the UK.

The court will decide whether Begum can return to the UK appeal against the revocation of her British citizenship.

Begum was 15 when she left her home in east London, travelling with two of her friends in 2015.

She was found by a reporter with the Times of London in a camp in Syria two years ago and in an extraordinary interview told him she would like to return to the UK.

Begum’s case has been the subject of much media and legal hype, the outcome of which led to the Home Office revoking her British citizenship on the grounds of national security.

The Court of Appeal ruled last year Begum should be able to return for a “fair and effective” chance to fight the decision but an appeal by the Home Office landed it in the Supreme Court, which will also decide if an appeal against the revocation should be allowed.

Begum’s revocation has left her in the Syrian camp of al-Roj in the northeast of the country, where access to justice is sketchy.

Defending Begum in the appeal, Lord Pannick QC explained to the court that the Syrian Democratic Forces that control the camp do not allow lawyers entry to speak to detainees.

Begum spent her years in Syria married to an ISIS fighter in the former stronghold of Raqqa where the group formed its own caliphate. She is one of many former family members who now live in the camps of Syria and Iraq under strict and reportedly deplorable conditions.

As reported by Brussels Morning, the UN has expressed grave concern over violence in the camp and lack of haste repatriating foreign fighters.

The camps of al-Roj and al-Hol have been described as a “hotbed of extremism”, where former residents of the so-called caliphate have imposed their own version of sharia law and security experts have warned that children of former fighters, many of which are from foreign countries, including other European states, could be taught to avenge their fathers.

While many states have expressed little willingness to repatriate ISIS members, there have been efforts, albeit slow, to repatriate the children.

Begum’s own children have failed to survive in the tough environments of Syria’s IDP camps.

Despite the official government stance, there has also been significant concern over the fate of Begum, not just in Parliament but specifically among the ranks of the Tory party.

Leaving them “swilling around in ungoverned space” would “necessarily create even more security risks for the UK in the future”, they claim.

“If they are judged to be a risk, then all the more reason why they should be returned to Britain where they can be processed by the British criminal justice system”, said Mitchell, a former International Development secretary, writing in The Telegraph.

Mitchell pointed to Section 5 of the Terrorism Act 2006 as an example of how justice could be sought for terrorism crimes committed by former ISIS members, including wives.

“Our justice system is also best placed to deal with the deep complexities of these cases. Many of the people involved travelled to Syria as teenagers, after being groomed online or trafficked by organised Isis gangs. These are challenging issues which must be considered”, he continued.

Mitchell, Davis, Tugenhardt and Ellwood are not the only Tory MPs to relay their concern at leaving Begum in Syria. Jacob Rees-Mogg, typically seen as sitting further right of the party, also expressed “great worries” about revoking Begum’s citizenship revocation at the time of the Home Office’s decision.

“I fear my listeners are going to think I’m a frightful snowflake”, he told LBC Radio.

“Ms Begum should be brought back to England and prosecuted if she has committed offences, rather than told to go to Bangladesh”, he said.

Begum’s parents are originally from Bangladesh.

“Why on earth should Bangladeshis pick up a problem that’s essentially our problem. We’re trying to put our litter in our neighbour’s garden”, he continued.

Rees-Mogg also ascribed Begum’s decision to go Syria lured by ISIS as being akin to grooming, speaking in a segment on British political programme Question Time in 2019.

The decision is to come a week after a report raised alarm bells over “barbaric” conditions and “systematic” deprivation in the camps of al-Hol and al-Roj.

Fifty Brtish women and children are being held in the camps that NGO Rights and Security International called Europe’s version of Guantánamo Bay.

According to the report, British intelligence officials regularly enter the camp and revoke the citizenship of any Britons they identify.

The report also claimed that the conditions in the camp amounted to “cruel, inhumane and degrading treatment” and a breach of human rights.

Leaving these individuals to fester in the camps in this way would be detrimental, said Richard Barrett, a former MI6 director of global counter-terrorism in the report:

“The longer they stay without proper assessment of their mental and physical health or their attitudes towards their families, communities and countries – the more unpredictable they will become. And the more difficult it will be to determine what they’re going to do”.

The judgment from the Supreme Court is due to be heard at 9.45 am.