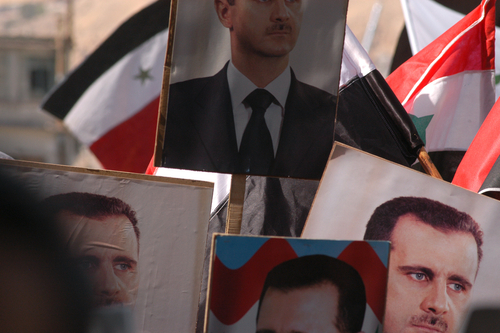 Paris (Brussels Morning) Unsurprisingly, Syrian dictator Bashar al-Assad has been re-elected for a fourth presidential mandate, winning 95% of the vote in a sham, unfair and undemocratic ballot. It was the second so-called election since the beginning of the 2011 revolution, in a country ravaged by ten years of destruction, death, massive displacement and was staged amidst a sobering economic crisis that has plunged the population into an unending spiral of loss.

Assad’s grip on power was confirmed in the government-held areas with no international presence to monitor the fairness of the election. Hammoud Sabbagh, the country’s parliament speaker, announced the results in a live conference on Thursday, adding that voter turnout was 78.66%.

The US, UK, France, Germany and Italy released a statement characterising Syria’s election as “neither free nor fair”, and calling it an orchestrated fraud by the Assad regime. The statement also dismissed the election as illegitimate, since it was held outside the framework of the UN Security Council Resolution 2254, according to which “free and fair elections should be convened under UN supervision to the highest international standards of transparency and accountability […] Without these elements this fraudulent election does not represent any progress towards a political settlement”.

Yahya al-Aridi, spokesman for the Syrian Negotiation Commission, as quoted by the BBC, declared: “This election shows contempt to the Syrian people. It’s a decision by the government, aided by Russia and Iran, to kill the political process. It’s a continuation of tyranny”.

For Syria specialist Thomas Pierret, it had nothing to do with convincing anyone that Assad is legitimate:”The whole point is to force Syrians to publicly enact their submission to Assad by performing the ritual. The latter is an end in itself”.

At the University of Damascus, the students who came to vote chanted the traditional pro-Assad slogans: “By our soul, by our blood, we sacrifice ourselves for you Bashar”, an AFP correspondent reported.

Assad himself set the tone for the grotesque spectacle by casting his vote in Douma, the besieged Damascus suburb where a chemical attack by regime forces in 2018 killed dozens of civilians.

He told reporters at the polling station that he gave no weight to Western countries’ criticism of the elections, Deutsche Welle reported. “The value of these opinions is zero”, he observed.

The Syrian government’s official Twitter account posted it’s summation of the outcome: “The Syrians had their say. Bashar al-Assad wins the presidential elections of the Syrian Arab Republic after obtaining 95.1% of the votes inside and outside Syria”.

Russia’s Foreign Ministry welcomed Assad’s “decisive” victory in a statement, noting, according to the Moscow Times, that “we view the elections as a sovereign affair of the Syrian Arab Republic and an important step towards strengthening its internal stability”.