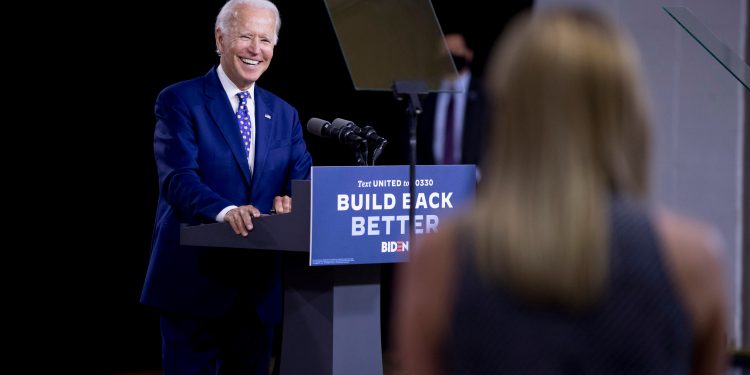 The final weeks of Joe Biden’s search for a running mate have had all the usual trimmings: leaks from unnamed Democratic party officials, last-minute suggestions of outsider names and a trail of vague hints from the candidate himself.

But this year is different. Biden promised to select a female running mate, setting up a historic nomination process that many prominent Democratic women say is being overshadowed by the increasingly nasty – and unmistakably sexist – debate over who he should choose.

“Even in this moment of women ascending to heights that we never have in our country’s history, it’s still really being talked about and debated through the lens of a man,” said Jess Morales Rocketto, the executive director at Care in Action, a nonprofit group that advocates for domestic workers.

In the last week, prominent Democratic men, campaign advisors and anonymous donors have suggested that senator Kamala Harris, a top candidate for vice president, was too ambitious and questioned her likability.

The former Connecticut senator Chris Dodd, a member of Biden’s vice-presidential vetting team, was also reportedly bothered by the lack of contrition Harris expressed over a blistering attack on Biden during an early Democratic debate – an odd point of caution for a candidate who has been in politics for decades and seen his share of heated fights. Dodd’s younger days as a partier and his history with women have also come into question during the process.

Overall, this year’s vetting period has been cast with a sense of Democratic elders critiquing potential running mates for Biden with the same stereotypical criticisms men too often lob at women.

Biden is reportedly now moving toward the final phase of his selection process. Jill Biden told Fox News on Tuesday that her husband was “close” to making a decision. An announcement is expected in the coming days.

His selection has historic implications. Although women have been nominated for vice-president, there has never been a female vice-president, and an African American woman has never been picked as a running mate of a major US political party. If Biden wins, his pick will be poised as a frontrunner for the nomination for president in the future.

All of which has caused Democratic women with extensive experience in the party to scoff at some of the comments elevated by longtime Democratic party officials during the vetting process.

“A new generation has arrived. It’s really interesting this cycle where there’s such an energy and new talent. And I think there’s quite a few past political folks who are trying to find their place in this new political leadership,” said Amanda Renteria, the political director of Hillary Clinton’s 2016 campaign.

Renteria added: “They’re just not constructive from a party perspective. But you ask any of those women who have been in an arena. They’re well prepared for that kind of treatment, because they’ve been experiencing it their entire life.”

LaTosha Brown, the co-founder of Black Voters Matter, said she has been “appalled” by the “racist, sexist tropes” used by party leaders and elected officials to undermine female candidates for vice-president, particularly woman of color.

“Being a Black woman with ambition is not a problem when it’s in the service of others,” Brown said, adding: “Black women have always been on the vanguard of fighting for our democracy, and we will continue to do so. But we will also hold accountable anyone who seeks to marginalize our contributions, our intellect or our electability. This is not going to be tolerated.”

The best way for Biden to show he condemns these remarks, she said, would be to put a Black woman on the ticket.

Throughout the vetting process there has been familiar scrutiny of potential running mates, such as past comments the California congresswoman Karen Bass has made in praise of Scientology.

Still, Bass has emphasized in interviews and to allies that she does not “envision” herself as president, which some view as a stark contrast with Harris. Bass has said she refuses to be pitted against Harris or any other woman in contention for the office.

“Don’t call me the anti-Kamala,” she said during an interview with The Breakfast Club on Friday.

She added that they spoke privately at the memorial service for the congressman John Lewis in Washington last week. “It was good,” Bass said of their conversation. “She said ‘We ain’t doing that.’ It was fine.”

Then there have also observations and critiques that do not usually emerge when men are being vetted, and that are familiar to women in the workplace from the boardroom to the factory floor.

The former Pennsylvania governor, Ed Rendell, told CNN that Harris can “rub some people the wrong way.” And in an interview with the Washington Post, he said he noticed that the Obama national security adviser Susan Rice’s political stock was rising because she smiled during a TV appearance – “something that she doesn’t do all that readily” – and was “actually somewhat charming” in her television appearances.

The comments exposed a generational divide between an old guard of white, mostly male leaders and a new cohort of diverse, trailblazing women who are increasingly ascendent in the party.

“You’re going to get that. That’s Ed. He has not changed. So you’re going to get those kinds of comments from him,” said Susan Turnbull, a former Maryland Democratic Party chairwoman and former Democratic National Committee vice-chair. “I think that women in particular are looking at this right now, going: ‘Just stop it. Don’t we have something better to be talking about?’”

“I mean, am I shocked? No,” Kathleen Sebelius, the former Kansas governor, said. “Any woman who has been in office or run before has heard similar comments along the way. They weren’t helpful then, they aren’t helpful now.

Though the jockeying has intensified in recent days, gender – and the enduring stereotypes of women and power – have shaped the process since the moment Biden eliminated half the population from contention.

Early on, Stacey Abrams, the 2018 Democratic nominee for governor in Georgia, was chided for publicly campaigning for the role of vice-president. “I would be an excellent running mate,” she told Elle Magazine, unapologetically making the case for her candidacy.

The Biden campaign has largely declined to engage in the public backbiting. But following the comments about Harris’ ambition, campaign manager Jennifer O’Malley Dillon pushed back. “Ambitious women make history, change the world, and win,” she wrote on twitter.

“There are a number of sharp, thoughtful, and, yes, ambitious women up to the task of working alongside him every day to win this race and unite our country,” she added in a fundraising email to supporters this week.

Harris, too, recently responded to the ambition line during an appearance at the Black Girls Lead 2020 conference.

“There will be a resistance to your ambition. There will be people who say to you, ‘You are out of your lane,’” Harris said.

There is a long history of disparaging women who seek political power as “too ambitious”. But many Democratic women have found the suggestion especially galling in light of Biden’s own rise to the vice-presidency.

“The point of being VP is that you’re next in line to being president,” Katherine Grainger, a partner at Civitas Public Affairs Group, and a co-founder of the women’s advocacy organization SuperMajority. “If we just look at Biden, he ran for president in 1988 and ran again in 2008 against Obama, and yet when he was chosen as the VP nobody said he was too ambitious to have that job.”

When women run for office, they disrupt a “patriarchal order” that has helped preserve a male-dominated status quo, Grainger said. Yet she is hopeful that elevating a woman to the vice-presidency could help shatter some of the old stereotypes that continue to constrain female candidates, more than 100 years after women won the right to vote in the United States.

“Women are constantly walking this tightrope of being the most qualified but also likeable or tough; pretty and strong but also team-oriented and compassionate,” she said. “What it creates is a structure where you never really see the authenticity of female candidates, because quite frankly they’re not allowed to be themselves.”

For some, it shows how many sexist barriers still exist in American politics.

“All over the world, we’ve seen countries elect female leaders and yet for the United States it is still a barrier,” said Donna Brazile, a former Democratic National Committee chair. “In this country it is still a hurdle for women candidates to be taken seriously, and to be treated as equals when it comes to their qualifications, their experience, and then knowledge of the issues and the political terrain.”

Brazile said the vice-presidential nomination in an opportunity to break “two glass ceilings” for women and Black women.