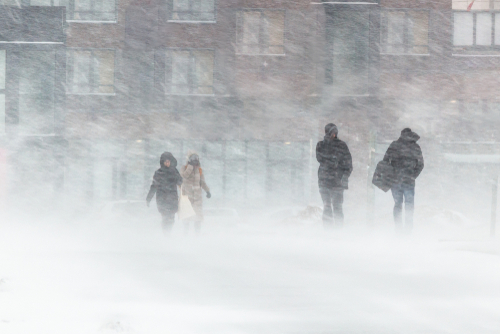 The blizzard, strong wind, sleet, against the background of houses blurred silhouettes of people, they try to hide from bad weather, overcome all difficulties of severe climate. go to the bus stop.

Brussels (Brussels Morning) The Netherlands and the greater part of northern Germany were left partially paralysed on Sunday as a severe snowstorm disrupted rail and air traffic over large swathes of Europe, AFP reports.

Dutch authorities declared a rare “code red” emergency for the entire country in response to the first major snowstorm to hit the area in more than a decade, while the German Weather Service (DWD) issued an extreme weather warning.

German local media reported dozens of injuries and traffic accidents around the country. Because of the heavy snow, few people ventured out on the streets of Hanover. In the Netherlands, some 80 cars were reported to have skidded off the roads.

This has been the first major snowstorm to hit the wider European area since January 2010. Weather services predict the cold spell will continue in both countries.