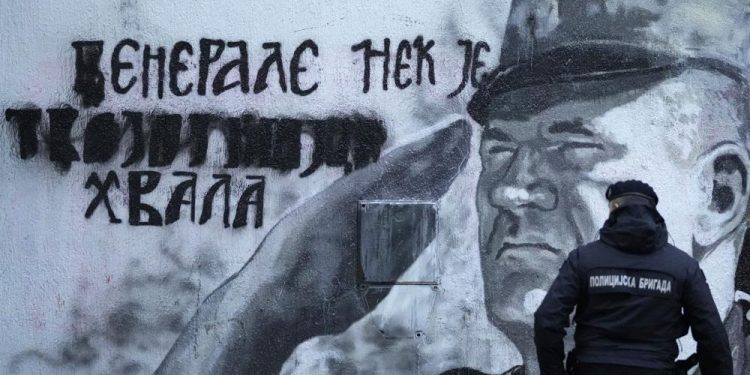 Brussels (Brussels Morning) Serbian police detained an opposition activist on Tuesday evening, after she defaced a mural depicting war criminal Ratko Mladić by throwing eggs at the wall with the mural.

Human rights activist Aida Ćorović reportedly bought a carton of eggs at a nearby supermarket on Tuesday evening, after which she approached the mural, located in downtown Belgrade, and proceeded to pelt it with eggs.

Plainclothes police officers then approached and detained her, together with artist and activist Jelena Jaćimović, who joined her as she hurled eggs at the wall. Local media report as many as 10 police officers used force to apprehend Ćorović and Jaćimović.

Ćorović, who was released from custody the same evening, later told regional media that it was “not by chance” that the mural depicting a war criminal was located in the centre of Belgrade, maintaining that its existence at that site was a deliberate provocation against opposition voters, who mostly reside in urban centres.

Mladić, a Bosnian Serb military leader during the war in Bosnia and Herzegovina, was sentenced to life in prison by the Hague Tribunal in June this year for his role in the Srebrenica genocide, the massacre of more than 8,000 Muslim men and boys forcibly taken from a protected UN enclave near the eastern Bosnian town of Srebrenica.

Despite his leading role in the worst crime against humanity on European soil since the Second World War, he remains to be hailed as a national hero by nationalist circles in Serbia, and among many Bosnian Serbs.

Serbian President Aleksandar Vučić, a former associate of wartime authoritarian president Slobodan Milošević, is presenting a reformed image to Brussels, but is accused by the opposition at home of fostering nationalism, stifling media freedoms and of corruption.

In a statement released after Ćorović’s arrest, the Serbian Interior Ministry claimed the police were merely enforcing public order, in observing a ban on all public gatherings near the mural, saying they regularly identify all persons on the site regardless of their views on Mladić.