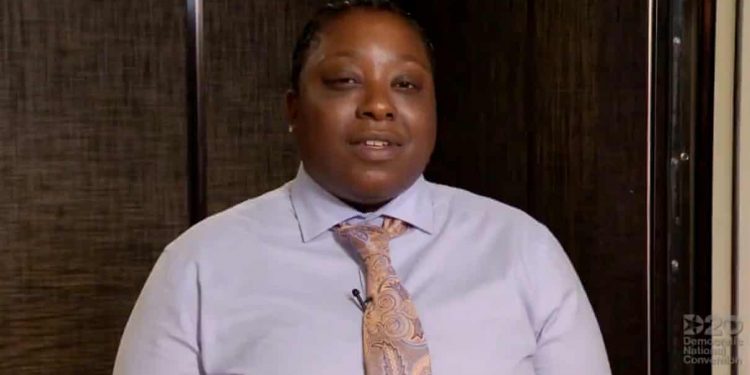 What would you do if you were stuck in an elevator with the potential future president for five minutes?

Security guard Jacquelyn Brittany, 31, (whose last name has been obscured at her request) almost lost her chance to say something when she escorted Joe Biden up an elevator last year. Brittany, who works as a security guard for the New York Times, remained silent for most of the journey, but when prompted by an aide she blurted out: “I love you, I do. You’re like my favorite!”

Biden had been on his way to a New York Times editorial board meeting trying to secure the paper’s endorsement. The paper did not endorse him, but Brittany’s endorsement soon eclipsed that fact: the moment was captured on an episode of The Weekly and quickly went viral.

On Tuesday, Brittany got to endorse Biden again: she was the first person to nominate him for president during the Democratic national convention.

“I take powerful people up on my elevator all the time,” Brittany said in a prerecorded statement for the convention, which was held online this year due to the coronavirus pandemic.

“When they get off, they go to their important meetings. Me? I just head back to the lobby. But in the short time I spent with Joe Biden, I could tell he really saw me, that he actually cared, that my life meant something to him,” she continued.

Her nomination appeared to nod at some of the major issues this election: the concerns of middle- and working-class America, the Black Lives Matter movement and the coronavirus pandemic.

“I knew even when he went into his important meeting, that he’d take my story in there with him. That’s because Joe Biden has room in his heart for more than just himself,” she said.

She finished by calling Biden her friend: “We’ve been through a lot and have tough days ahead. But nominating someone like that to be in the White House is a good place to start. Thats why I nominate my friend Joe Biden as the next president of the United States,” she said.