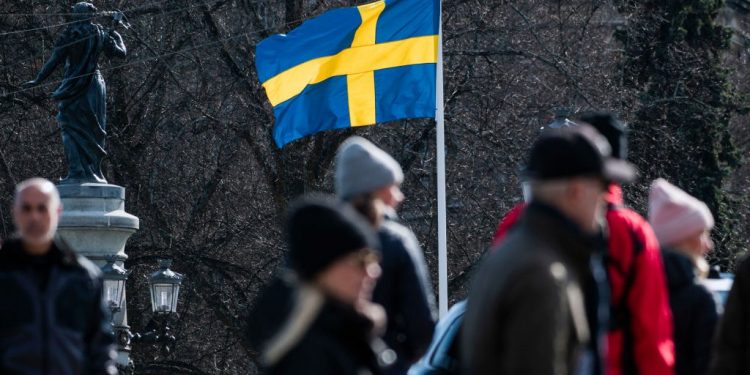 In Sweden, life under corona has continued at almost normal pace with a notable absence of masks. In neighbouring Finland, stay at home orders have slowed down public life, closed schools and limited travel and outings. With deaths numbering over 6,000 in Sweden and just above 300 in Finland, the Finns cast a wary eye on their western neighbour Sweden’s approach.

Brussels (Brussels Morning) The atmosphere in Stockholm resembles normality, despite working remotely being the new norm.

Bars, cafés and gyms remain open and, even with the new rules in force, public gatherings, while subject to limitations as to how many can attend them, are not required to observe advisory measure that might apply in the private sphere, although it is it recommended to avoid contacts. Nonetheless, Sweden currently counts almost 3,000 patients in intensive care right now and has recorded 6,321 deaths to date.

The signature Swedish corona response has been Prime Minister Löfvén’s emphasis on everybody having to exercise personal responsibility, without resorting to any more specific or stringent rules, and Public Health Director Anders Tegnell’s downplaying of the situation, with assurances that the epidemic will pass and herd immunity will form within the population.

All along, Tegnell has waited for the epidemic to subside, seemingly unfazed by critics who would have wished for more forceful restrictions to have been applied to public life in Sweden.

Compared to Finland, with just over half the population and 371 corona deaths this year, Sweden has served as a cautionary tale, this despite their obvious differences.  With very few metropolitan areas, no Finnish city comes near the Swedish capital in population density and Finland’s population is more dispersed.

The nation of 5,5 million continues self-isolating geographically , its borders practically closed towards both Sweden and Russia, while retaining some traffic across the Bay of Finland with Estonia. Daily life has returned to normal, with the exception of masks having to be partly worn in schools and some other public spaces.

COVID deaths on the rise in Sweden

With a spike in the number of deaths in the last two weeks, there is increased pressure on the Swedish government to act. So far, public events have been permitted to go ahead, but from next week, public gatherings are limited.

”Public gatherings of more than eight people will be forbidden and alcohol cannot be served after 10pm”, Swedish Prime Minister Stefan Löfvén said this week.

“We all know the reasons for this. The kind of personal responsibility that people showed in spring is not present now and this won’t do when we are in the midst of a pandemic,” he declared. ”Now we have to change our behaviour in a big way.”

”The disease is still fatal, mainly for the age group above 80 years old,” Public Health Director Anders Tegnell announced in his usual matter-of-fact manner at this week’s press conference.

”Overall fatality rates are at the same level compared to the same period five years ago and in particular in the last few months the trend was decreasing,” Tegnell said, continuing to defend his approach of discerning the bigger picture in terms of the threat to public health in general.

”Some countries show a quick surge in infections and then it fades out, but it is difficult to predict for Sweden.”

Life in Sweden still bears a remarkable resemblance to what once passed for normality. However, there could be further restrictions at the local level, similar to those in Finland, where a travel alert applies to the southern part of the country.

Swedish Public Health Director Tegnell remains steadfast in his belief that the virus should take its course until natural herd immunity is established within the general population.

This sanguine approach has been praised by some for not invoking any general lockdown, but his critics have clearly wished for more decisive action by the government.

Meanwhile, others challenge data that register COVID as the cause of death and point to co-morbidity factors like other conditions, which, they maintain, gave rise to distorted numbers that outweigh the actual viral infections.

Masks in public are considered unnecessary since there is not enough evidence of their efficacy in preventing the virus from spreading, a view Tegnell reiterated this week when prompted by a journalist.

”There is no good research to refer to, whether in favour or against the use of masks, unfortunately,” he claimed. ”Masks can be a complement when crowds cannot be avoided. There could potentially be situations where the use of masks could be beneficial, but so far no such situations have emerged.”

Across the Baltic Sea that separates the neighbouring Nordic capitals by only 400 km, the government in Helsinki eyes the Swedish approach with unease.

Testing has shown a slight increase in case numbers in the Finnish capital region leading the authorities to isolate, both on a personal basis and by cutting off traffic into the country.

The neighbouring countries have only minimal passenger traffic between them, with day cruises forbidden and only a few flights being operated.

The closing of the northern land borders caused significant limitations in the Torne Valley region when, for a few months this spring, freight and goods transports were not permitted to pass the border crossing into Finland.

The cross-border commute between Finnish Tornio and Haparanda on the Swedish side, twin cities divided by a river border with a bridge that has been open for travel without border inspection since 1958, ground to a halt.

Controversies over people and transports rejected from entering on the Finnish side were challenged in court as unconstitutional but politically, the Finnish government remained popular and the mindset turned into one of suspicion towards anyone crossing from Sweden.

The soft Swedish approach has garnered its share of critics. “I have from the outset said that we need an EU regulation, not a directive, but a regulation for issuing health emergencies throughout the EU,” Finnish MEP Sirpa Pietikäinen, from the Conservative EPP group, says. ”Then all countries would act in the same manner. So we would not have this situation whereby Sweden does one thing, Finland another.”

She is concerned that the restrictions surrounding the pandemic will last for most of next year as well.

“The virus does not know borders so now when some country opens up and others close down, we keep going back and forth”, says Pietikäinen, who is a member of the European Parliament’s Committee on the Environment and Public Health. ”When we see the statistics in the committee for Europe, it is frightening.”

Pietikäinen fears that some areas in Europe act as hubs for the virus spreading.

”It could take another year if we keep going like this, closing and then picking up again. We can’t act efficiently together with our 27 different healthcare systems in the EU. If at least we could agree on uniform testing and how and when to wear masks, we would be a lot further by now, as in Japan or New Zealand!,” Pietikäinen exclaims.

Meanwhile in Sweden, Public Health Director Tegnell is undecided as to whether the outbreak of COVID is slowing at a natural pace or whether the reduced numbers of hospitalisations in e.g. Belgium over the last days are due to restrictive measures.

”It could be due to several factors, but so far it is too early to conclude anything with regard to the holidays,” he said, with an eye to Christmas next month.

Finland maintains its limits on travel for other than essential purposes while Prime Minister Marin is calling for a digital travel pass for future tourists or for repeated corona testing before and after entering the country.

With the skiing season beginning in the north of Scandinavia, ski resorts in Finnish Lapland have seen all group reservations cancelled by the biggest tour operators who are now favouring Swedish ski resorts that are opening for the winter with their business.

Angry voices in the North have been accusing the government in Helsinki of ignoring the Lapland tourism industry, which has remained closed since it registered the first corona cases among visitors in January this year.

Now fears abound over foreclosures and lost investment in hotels and services, which face a winter season with hardly any foreign tourists.

Domestic demand is not enough to make up for the losses of both European, British and Asian tourists in the area. The economy has been hit on both sides of the border, with the Finnish economy shrinking at a projected 4.3% of GDP this year and the Swedish decrease at minus 3.4% of GDP in the year so far.