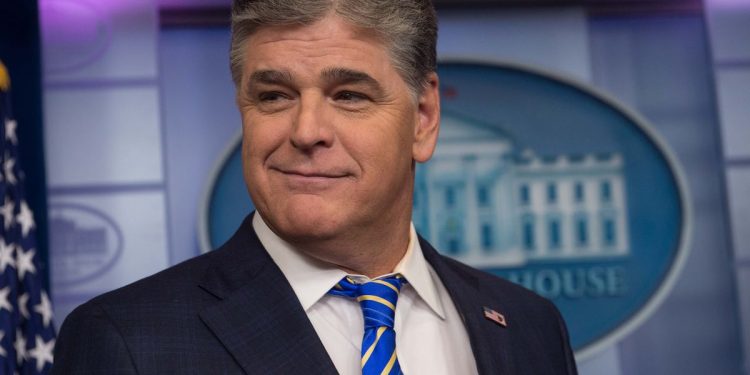 The Latin motto on Fox News anchor Sean Hannity’s new book has been changed after the original was described as “complete and utter gobbledygook” by a classics student.

Hannity’s Live Free or Die: America (and the World) on the Brink, which argues “now is an All Hands on Deck moment to save the Republic”, was published on Tuesday. But as Business Insider pointed out, the Latin motto it uses as a subtitle has been quietly changed from the original jacket.

At first, the cover featured the Latin tagline “vivamus vel libero perit Americae” – a phrase that Hannity told viewers on Fox means “live free or America dies”. But as Indiana University Bloomington classics student Spencer Alexander McDaniel laid out on his blog in May, the Latin phrase makes little sense.

“It is clear that whoever came up with this motto does not even know the basic noun cases in Latin or how they work,” wrote McDaniel. “The words in Hannity’s motto are real Latin words, but, the way they are strung together, they don’t make even a lick of sense.”

McDaniel, who was not the only classicist to question Hannity’s “perplexing” Latin, translated Hannity’s Latin text as “Let’s live or he … passes away from America for the detriment of a free man”. He then inferred that the incorrect Latin had been arrived at by putting “live free or America dies” into Google Translate.

After the error was shared widely on social media, the text on Hannity’s book jacket was updated to “Vivamus liberi ne America pereat” – a phrase that McDaniel says on his blog “neatly translates into English to mean, ‘Let us live free so that America will not die’.”

“Curiously, the unintelligible Latin word salad has vanished from the front cover and been replaced,” the classics student writes. “This makes me wonder: Did someone at Threshold Editions read my blog post and realize they needed to fix the bad Latin?”

Since it was possible the change had been made after someone at Hannity’s publisher had read his article, McDaniel went on to address the television presenter directly: “Sean Hannity, if you’re reading this, I want you to go on your show and publicly admit that you’ve done nothing on air for the past 11 years but peddle lies, nonsense, and conspiracy theories. Then, I want you to disavow white supremacy, misogyny and xenophobia, acknowledge the reality and seriousness of climate change, and tell all your viewers to take Covid-19 seriously and wear masks in public at all times.”