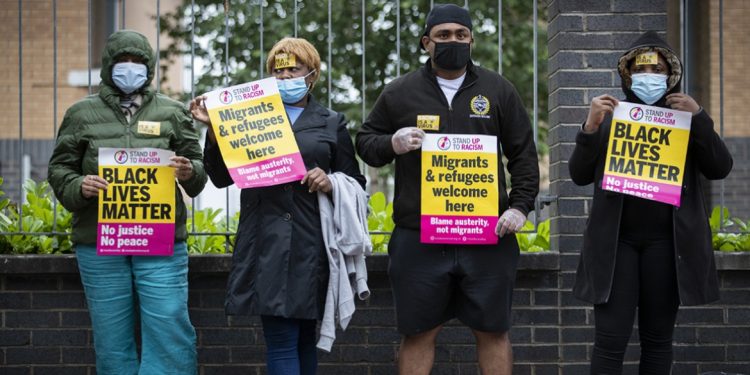 Referencing the deaths of Adnan Elbi, Mercy Baguma and Badreddin Abadlla Adam, Stephen said an FAI “may very well find that the key thread going through it is the challenges of the asylum system and how asylum seekers have been treated during Covid-19”.

An FAI is held in the public interest and is a public examination of the death’s circumstances before the sheriff. The idea is to establish the cause of death and its time, place and circumstances.

Baguma was a Ugandan-born asylum seeker found dead in her Glasgow flat, near her crying child. One housing group has said Baguma was virtually destitute while authorities have declared the cause of death is unascertained.

Elbi was also found dead in his room in the guest house owned by the Mears Group, a Home Office contracted asylum landlord. He was allegedly forcibly moved during the pandemic.

Baguma was also due to be moved to other accommodation, said Stephens, “Our view is that there is a clear thread and that is how the asylum process and system is treating asylum seekers.

“We’ve seen evidence that the BAME community has suffered most during COVID”, he added, “we know in some of these circumstances people feel when they’ve been placed in other accommodation that they feel as if they’re going through another detention.

Asylum seekers can claim around £37 a week, a place to live, or sometimes both. Stephens claimed those in hotel accommodation don’t receive any money.

Concerns around using hotels to house asylum seekers have arisen, due to mental health impacts, particularly after Sudan-born Badreddin Abadlla Adam went on a stabbing rampage at the Park Inn Hotel. The group moved around 350 asylum seekers from flats into hotels at the start of the pandemic, but the Home Office said such measures are under review.

“Certainly we feel there’s a public interest here to find out what has caused these deaths”, said Stephens, “and whether the asylum system itself is partly responsible”.