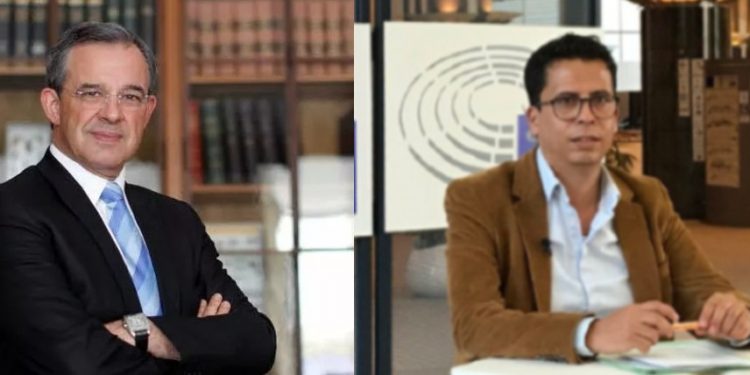 On the left MEP Thierry Mariani, on the right MEP Mounir Satouri

An Interview with MEP Mounir Satouri

Saudi Arabia is keeping hundreds if not thousands of African migrants locked in heinous conditions reminiscent of Libya’s slave camps as part of a drive to stop the spread of Covid-19, according to an investigation by The Sunday Telegraph.

The report is based on a video of migrants held inside detention centres, which shows dozens of emaciated and scarred men, bearing the marks of abuse and beatings, lying shirtless in tightly packed rows in small rooms with barred windows. The newspaper says that one image, ‘‘too graphic to publish,’’ showed a young African man hanging from a window grate “in an internal tiled wall’’. Another showed a ‘‘corpse swathed in a purple and white blanket’’ of a migrant who had died of “heatstroke’’.

Earlier this year, Amnesty International said ‘‘the abuse of migrant workers intensified in Saudi Arabia and some other Gulf countries during the coronavirus pandemic and the unsanitary overcrowded conditions in the labour camps.” The report also puts the spotlight on Saudi Arabia’s strict version of the notorious Kafala (passport withholding) system, which is also used on other Gulf countries.

In an interview with Nafez Sami of Brussels Morning, MEP Mounir Satouri (Greens EELV in France), a member of the European Parliament’s Human Rights Committee, expressed his anger at the images.

Nafez Sami, Brussels Morning (BM): What is your reaction to human rights violations on this scale?

MS. I am deeply shocked. I will never understand how some people can embody such a dehumanizing system. These images are an insult to humanity and certainly not a response to COVID-19. Thousands of migrant workers, having been held in servitude, are now reportedly being unlawfully locked up in inhuman conditions in detention centres. In addition to the violence, there is the risk of illness, including mental illnesses and even death as an outcome. I am beyond being moved and shocked. I feel it is my strong political duty to help shed light on this situation and to all I can to free these victims who are suffering such inhuman and degrading treatment.

BM. Can the European Parliament play a role in holding regimes such as the Saudi Arabia Kingdom to account?

MS. Sadly, the plight of migrants in Saudi Arabia is already well documented. These new revelations about migrant workers literally parked while awaiting death call for a strong reaction from the international community. To put an end to these gruesome practices, the top priority should be to guarantee free access to all detention centres so that independent experts from NGOs, the UN, the ACHPR, the EU and the like can undertake immediate humanitarian intervention and observation missions. An independent investigation must be launched immediately under the auspices of the UN to determine the chain of responsibility. It is essential to act quickly to identify all the sites where these atrocities occur and to identify all the victims. The next step is to move up the chain of accountability and if it turns out that the Saudi Arabian Government has knowingly organized or tolerated these detention centres, we will have to take action.

BM. What can the EU Commission and Presidency do?

MS. At a minimum and without delay, they should call on our counterparts for explanations by putting the issue on the agenda in all our relations with Saudi Arabia as a reminder that respecting human rights is a fundamental condition for all agreements. Above all, we must avoid limiting ourselves to a one-shot call for change. Instead, we must ensure that the situation is closely monitored and followed up.  The EU should do its utmost to contribute to the humanitarian rescue of the victims and to help them, should they wish, resettle in their country of origin.

MS. If it were confirmed that Saudi Arabia is organizing the detention of migrant workers on a large scale in unlawful, undignified and inhumane conditions, targeted sanctions on those responsible would certainly be a necessary and relevant part of the EU response.

BM. Have there been any attempts to gain access for independent health and human rights experts?

MS. Not to my knowledge.

Saudi Arabia, recognised as one of the richest countries on earth, has yet again drawn attention to itself by these shocking images. Once more, Saudi Arabia seems to choose to ignore all calls for change, that it respect human rights and stop these violations.  The US’s staunch ally in the region recently announced many reform initiatives within the Saudi system as directed by Prince Mohammed bin Salman, the “crown prince”. Seemingly these reforms have not benefited the human rights of its migrant workers, their right to live in dignity and security. Instead, they live under the continuous threat of deportation or of not being paid under the iniquitous Kafala system.

International human rights activists around the world have been urging that sanction be imposed on Saudi Arabia to force the authorities there to take serious actions and to make for real change. Many believe that the untold stories in the Kingdom are even worse than what has been revealed so far, begging the question “what exactly is happening there?”