by Quintin Oliver
in Our pick 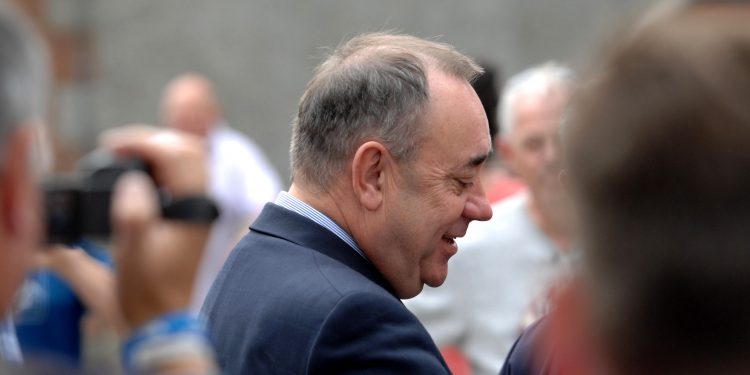 Belfast (Brussels Morning) On my first day at St. Andrews University in Scotland, I nervously knocked the student flat next door to mine and introduced myself to its occupant, who confidently responded: ‘Salmond, Alex Salmond’.

Little did I know then what was to become of us both over the subsequent five decades; his strategic masterstroke in launching an audacious bid to hold the balance of power in the next Scottish Parliament elections in six weeks is very typical.

Many leading politicians, having lost their elected positions and been daunted by a titanic three-year struggle against sexual abuse charges, from which he emerged innocent on all counts, and then against the government of which he was former leader for the way it had handled those same charges, might have chosen the softer option of retiring with his much older wife to ponder what might have been over a good dram of whisky.

But not Alex. He was always strategic, eschewing the cat-fighting of domestic student politics at our University, and leap-frogging his way to Scotland-wide efforts, and then to national politics in Edinburgh and London; he knew that his radical fringe ginger group, The 79 Group, would probably be expelled from the Scottish National Party, but his was a longer game, that came to pass with readmission and senior posts for its leading members, who took over the previously traditional machine, taking it – and him – to the pinnacle of power, and almost to Scottish independence in the narrowly lost 2014 Referendum (in which, for full disclosure, I campaigned against him).

Return to the fray

So, why now a return to frontline political fray?

First, he has spotted a loophole in the second vote system for the Scottish Parliament, designed to offer some proportionality short of one, two, three voting throughout; it had been partially exploited in earlier outings by the Green Party, whose votes were similarly spread thinly, not deep enough anywhere to win first-past-the-post ballots in the constituencies. Salmond wants to win four or five seats this way, not open to the SNP who are slated to win nearly all the 73 ward seats. He can, therefore, claim not to be splitting the Nationalist vote, but rather complementing it for the wider independence cause.

Second, since the SNP is likely to hover at around the 65 seat mark needed for a majority, he may be able to oust those same Greens as the arithmetical pivot on which the putative Scottish Government will turn. His Alba handful could hold the balance of power.

Third, that will enable sweet revenge to be exacted on his erstwhile tormentors in the party he made electable, while also maintaining and building public support for a more radical independence campaign in style and substance, just as his 79 Group had plotted. He has also scores to settle with the civil service, who handled his sex charges so woefully.

Fourth, as an inveterate parliamentarian, he knows his procedure book, as when he interrupted then UK Chancellor, Nigel Lawson, in his Westminster Budget Speech of 1988, garnering the headlines in return for a short expulsion. His doughty bunch of MSPs, if they garner the just under 6% necessary under the D’Hondt formula to gain seats, will hustle and harry his SNP rivals on one side, and empower the opposition parties to undermine the First Minister, Nicola Sturgeon, so long his running mate but now his nemesis. It could become very uncomfortable for her.

And finally, as a hugely self-confident leader, debater and orator, Salmond has much to say about anything and everything. But can he make it?

His popular stock is low, however ‘well-kent’ his name and face; he is associated with toxic sex allegations, even if found innocent in court (one charge remained not proven, a quaint Scottish judgment, short of either innocent or guilty); his new party, Alba, is already attracting malcontents and oddities, and may be hard to manage; he himself is not a good delegator, always operating from the front, in the limelight.