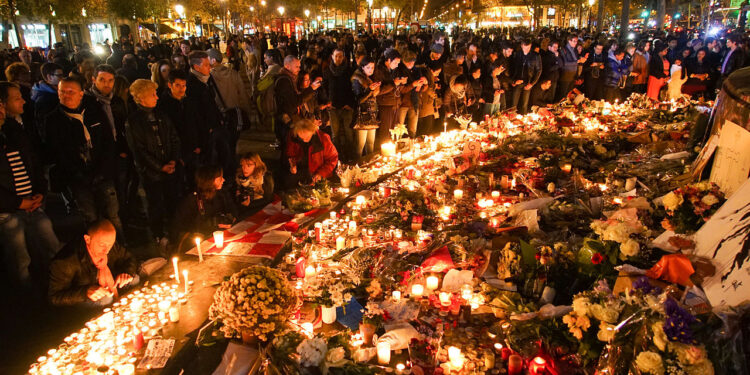 BRUSSELS (Brussels Morning) – On day 102 of the trial for the attacks of 13 November 2015 in Paris, Salah Abdeslam decided to invoke his right to remain silent, and then answered a few questions.

Claire Josserand-Schmidt, lawyer for the civil parties, did answer Abdeslam, because he had promised her so before. “The bourgeois parties do not want to ask you questions to trap you, but to try to understand, to understand you,” insisted Josserand-Schmidt. After two hours of silence on the questions of the court, the prosecutors and the first lawyers of the civil parties, he finally spoke.

Abdeslam said that he only started thinking about a bomb belt on November 11, two days before the attacks, when he heard from his brother Brahim Abdeslam that Abdelhamid Abaaoud is in Belgium and wants to meet him. “I didn’t go all the way through,” Abdeslam said. “I refrained from putting on my seat belt, not out of cowardice, not out of fear, but I didn’t want to, that’s all.”

“Why had Abdeslam told me the seat belt wasn’t working? Is that a lie then?” asked the lawyer. Abdeslam confirmed this. “I was ashamed that I hadn’t gone through with it. I was afraid of the look of the others. I was 25 years old. That’s it, it’s the fact that I was ashamed, very simply”, before falling silent again to shroud.

A police expert explained that the bomb belt that Abdeslam left behind on the night of November 13, 2015 in Montrouge, a suburb of Paris, was not working. Abdeslam broke his silence one more time to clarify that he had removed the battery and push-button itself before leaving the vest.

At first he wanted to be silent

“Good day Mr. Chairman, ladies and gentlemen of the court. Today I wish to exercise my right to remain silent,” Abdeslam began at the start of the trial. “That is your right,” replied the chairman, “but it was not foreseen at all. You have not declared yourself until now, so we do not understand.” The chairman was visibly disappointed, journalists reported from the courtroom.

“It’s an absolute right, the right to remain silent, but allow me to insist, it’s important for everyone,” the chairman tried again. “I also want to insist: I do not wish to express myself today,” Abdeslam said. “It’s a right I have, I don’t have to answer for it,” he said.

“I was silent for six years, it was not easy. It was the position I wanted to take at the beginning of the process. But I changed my mind, I gave answers. I also expressed myself for the victims, with respect I can’t speak from now on,” Abdeslam said.

Abdeslam is the sole survivor of the IS command that killed 130 people and injured hundreds. He faces life imprisonment for the terrorist crimes of which he is accused of.