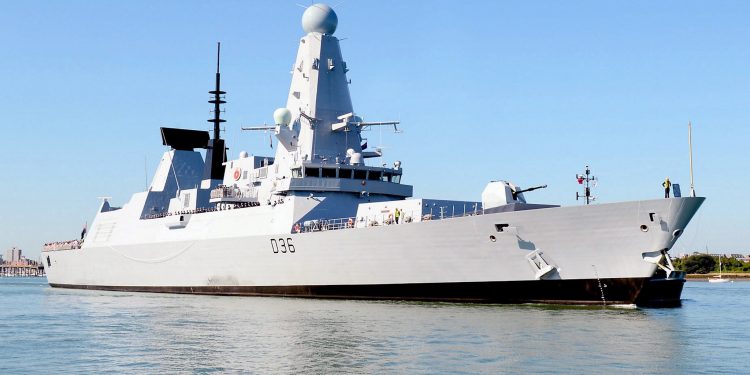 The Royal Navy Type 45 Destroyer, HMS Defender. HMS Defender is the fifth of the Navys six £1bn Type 45 destroyers  Defender was built in Glasgow which is one of her two affiliated cities (the other is Exeter). After delivery to her home port of Portsmouth in July 2012 she is now undergoing extensive Sea Trials and Training and is expected to join the Fleet early this year.

Moscow accused Britain of violating the UN Convention on the Law of the Sea, since its warship reportedly entered Russian territorial waters. The TASS agency reported that the UK’s military attache in Moscow was summoned by the Russian Defence Ministry to explain the transgression.

The UK Defence Ministry had a completely different slant on the incident, insisting that no
warning shots had been fired at its destroyer, and that it had never left Ukrainian territorial
waters. In a statement released on Twitter, the British ministry said it believed the Russian
forces were undertaking a gunnery exercise in the Black Sea.

Claims that Russian naval vessels provided the maritime community with prior warning of their activity were at odds with the British version of what transpired, which said no warning of any kind had been issued to HMS Defender to leave or cease trespassing. The British statement also claims that no bombs were dropped in the path of the Royal Navy vessel, and says its military attache was not summoned in Moscow.

Ukraine responded to the Russian claims by saying the incident was illustrative of Moscow’s policy of aggression and provocation. Authorities in Kiev used the incident to launch a fresh call for a “new quality of cooperation between Ukraine and NATO” in the Black Sea.