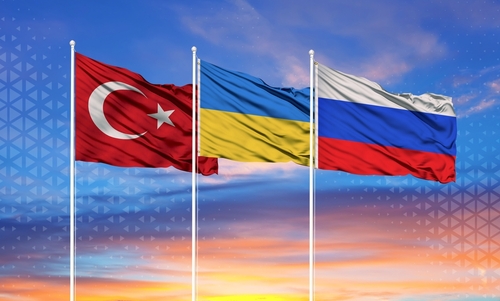 Belgium, (Brussels Morning Newspaper) The foreign ministers of Russia and Ukraine met in Turkey today, marking their first encounter since the start of the war.

Despite Turkey’s hopes that the talks could prove to be a turning point, Ukraine’s Minister of Foreign Affairs, Dmytro Kuleba, pointedly lowered expectations for a truce, Reuters reported

Turkey’s Minister of Foreign Affairs, Mevlüt Çavuşoğlu, is heading the Turkish delegation mediating the talks. He pointed out that both Kuleba and Lavrov had requested that he attend.

Before the meeting, Kuleba called on his Russian counterpart Sergey Lavrov to engage “in good faith, not from a propagandistic perspective”, while indicating anew that he does not have high expectations.

“We are interested in a ceasefire, liberating our territories and the third point is to resolve all humanitarian issues”, he pointed out in a statement on Wednesday.

The Russian side had insisted that its demands must be met if hostilities are to cease and that these included the stipulation that Ukraine abandon its NATO aspirations.

Russian and Ukrainian delegations previously met in Ukraine and Belarus with little impact.

Moscow describes its invasion of Ukraine as being a “special military operation” aimed at limiting Ukraine’s military capacities and fighting against “neo-Nazis”, claims Kiev rejects outright, terming the Russian attack as an unprovoked war against a democracy.

Today’s meeting is being held on the margins of a diplomacy forum in Antalya. Mustafa Aydin, Head of the Turkish International Relations Council, describes the meeting as “a step forward” and notes that it could lead to even higher-level meetings.

“Russia is not yet close to entertaining peace, though it is slowly changing its stance,” Aydin declared. “Its initially uncompromising posture is slowly giving way to a negotiation stance though not yet enough for a concrete outcome”, he cautioned.

Turkey maintains good ties with Russia and Ukraine, and shares a maritime border with them in the Black Sea. While Ankara cooperates closely with Russia on trade, energy and defence, the fact that it has supplied Ukraine with drones has angered Moscow.

Although Ankara has described Russia’s attack as unacceptable and has called for an end to hostilities, Turkey has not supported sanctions against Russia.