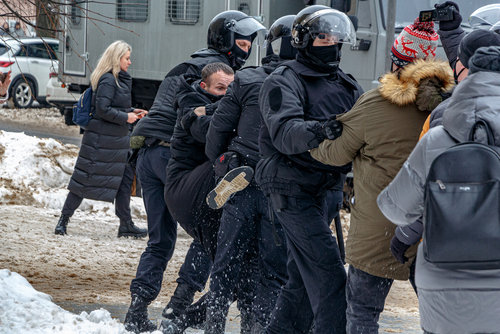 Tver, Russia - January 23, 2021: Arrest of protesters during a demonstration by residents of Tver in support of Navalny.

Brussels (Brussels Morning) According to associates of jailed Kremlin critic Alexei Navalny, the prison authorities are “threatening to force-feed him”, after the opposition leader lost several kilos since starting a hunger strike to protest what he claims is a lack of appropriate medical care, Deutsche Welle reports.

Last month, Navalny claimed to be suffering acute back and leg pain that came to impair his mobility. Despite this, the authorities have refused him his right to be seen by a physician of his choice. A prison doctor concluded that Navalny’s health was “satisfactory”, reportedly providing him with two analgesics for his acute pain.

After his requests to see an outside doctor were repeatedly denied, Navalny began a hunger strike, and now, at 77 kilos, is said to weigh some 15 kilos less than when he arrived in the penal colony in February.

“Seeing the seriousness of the hunger strike, the administration is threatening every day to start force-feeding”, Navalny’s aides posted on Twitter. They added that he had been transferred back to the prison barracks from the infirmary, where he had been taken last week after reporting that he was suffering coughing fits and a high fever.

A vociferous critic of Russia’s President Vladimir Putin, Navalny was jailed in February for allegedly breaching the terms of a suspended sentence. Prison authorities reported Navalny had failed to report to their Moscow office as required at a time when he was being treated in Germany after a failed assassination attempt using the novichok nerve agent.

The Moscow court disregarded a prior ruling by the European Court of Human Rights (ECHR) that the original verdict that found Navalny guilty was the outcome of a politically-motivated process and that it also failed to take into account the fact that he had been given personal permission by President Putin to be transferred to Germany for treatment.
On Navalny’s return to Russia, he was detained and promptly sentenced to two-and-a-half years in prison, sparking a wave of protests in many Russian cities, and marking a significant deterioration in Russia’s relations with the EU, which continues to demand that Navalny be released from prison.