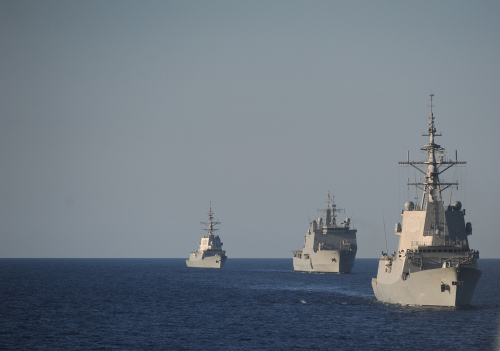 Brussels (Brussels Morning) Tensions are mounting in the Black Sea as Russian warships patrol Crimean waters and perform live fire drills, while more than 30 ships from Ukraine and NATO countries proceed with a two-week, naval exercise.

On Thursday, Russian warships carried out live-fire gunnery exercises, according to Interfax, which cited naval sources as stating that two landing craft had fired at sea and air targets in the Black Sea.

At the same time, 32 warships from Ukraine, the US and 30 other countries are participating in the annual “Sea Breeze” naval exercise in the Black Sea, along with a contingent of US Marine Corps troops and a number of special operations forces. Having started this Monday, the exercises are expected to last for two weeks, as Ukraine and NATO allies train for “joint actions during multinational security and peacekeeping operations”.

The Kremlin has vehemently opposed this year’s Sea Breeze exercise. Russia’s ambassador in Washington called for it to be scrapped. Just before the drill got underway, the British destroyer HMS Defender passed through Crimean waters, which Moscow maintains are Russian even though western countries insist they are Ukrainian, a further disagreement adding to the tensions between the Kremlin and NATO.

Russia’s Defence Ministry claimed last week to have fired warning shots at the Defender, forcing it to leave Russian territorial waters. The UK offered an alternative view, claiming Russia was conducting gunnery drills, while its ship peacefully and legally passed through Ukrainian waters without diverting its course.

On Wednesday, President Vladimir Putin, whose party faces declining support ahead of September parliamentary elections, stated that the Russian navy could have sunk the British destroyer without starting a war, and accused the US of being a party to the British navy’s “provocation”.
Earlier this week, the Netherlands Defence Ministry revealed that a Dutch frigate, HMNLS Evertsen, had also been accosted by Russian military during its passage through the Black Sea. According to the Dutch account, a number of fighter jets and bombers engaged in “mock attacks” against the vessel, before engaging in electronic warfare.