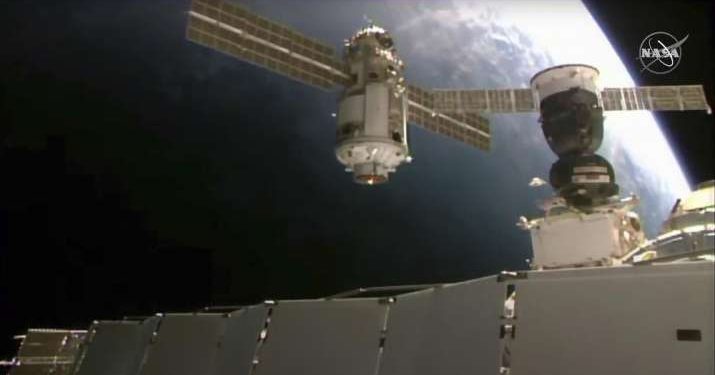 Brussels (Brussels Morning) The long-awaited Russian science lab module sent the International Space Station (ISS) out of control as a malfunction restarted the module’s thrusters, causing a loss of control for the venerable orbital habitat.

The Nauka Multipurpose Laboratory Module (MLM) docked with the station on Thursday, following more than a decade of production and testing problems that have plagued and delayed its planned launch since 2007. Several of its component parts saw their warranties expire while awaiting launch, necessitating replacement or re-certification. Its eventual July launch was probably its last chance to go to space before more warranties expired, grounding  the vehicle even further.

Several hours after docking with the ISS, the Nauka module’s jet thrusters suddenly ignited, pitching the station out of its regular position, with the mission controllers declaring a “spacecraft emergency”. The station lost control for about 45 minutes, before ground teams counteracted the Nauka’s push by activating thrusters on another module.

Before the counter-thrust was activated, the station had been rotating out of alignment by about half a degree per second. After Nauka’s thrusters were shut down, the station’s rotation was back under control, and the ISS was soon returned to its original orientation.

According to NASA’s ISS programme manager, Joel Montalbano, none of the astronauts were in immediate danger, and none personally felt any movement. In a potential worst-case scenario, the docked SpaceX crew capsule could have been used as a lifeboat, returning all seven astronauts safely back to Earth.

The Russian space agency Roscosmos is still investigating the cause of the malfunction, but claims that current telemetry from the module’s systems indicates that all are operating normally.

Nauka is the last planned Russian addition to the 22-year old space station. Russia is slowly pivoting away from cooperation with Western powers in space exploration, and has announced that it will stop sending cosmonauts to the ISS by 2025 at the latest.

While Roscosmos is still expected to continue cooperating with ESA on Mars exploration missions, Moscow reached an agreement with Beijing earlier this year to launch a joint Moon base programme.