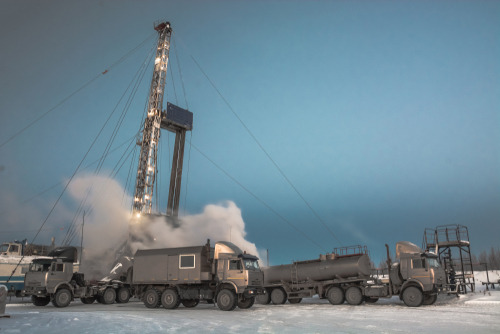 Drilling a deep well with a drilling rig at an oil and gas field. The deposit is located in the Far North beyond the Arctic Circle. The shooting was conducted in the winter during the polar day

The Russian Emergency Situations Ministry reported in a statement that Minister Yevgeny Zinichev fell off a high cliff into a mountainous river, in an attempt to save the life of Russian filmmaker Alexander Melnik.

According to Margarita Simonyan, the editor-in-chief of the state-run broadcaster RT, Zinichev and Melnik were standing on the edge of a cliff, when Melnik suddenly slipped and fell. Zinichev then reacted instinctively and jumped after Melnik, hitting a protruding rock in the river below. Both men were killed in the fall.

Melnik and Zinichev were both in the remote northern city of Norilsk, where the filmmaker was working on a documentary about the Arctic and the Northern Sea Route. Zinichev was on location to oversee a series of emergency response drills, aimed at preparing the Russian emergency services for potential rescue scenarios in the Arctic region.

Zinichev was a close ally of President Putin, sharing his background in the former Soviet security apparatus. Zinchev served as a KGB officer and was involved with the Soviet Navy. In 2006, he became a member of Putin’s security detail, where he served until 2015.

He moved up the ranks to become the Deputy Director of the Federal Security Service between 2016 and 2018, also serving as Kaliningrad exclave acting governor some time in 2016. In 2018, he was appointed Minister of Emergency Situations.
Kremlin spokesman Dmitry Peskov called Zinichev’s death “a great loss”, noting that President Putin shared many years working with Zinichev. Putin sent his condolences to the family, saying Zinichev’s death represented “an irreparable personal loss” for him, stressing he was “a true military officer, a comrade, a person of great inner strength and courage and bravery”.