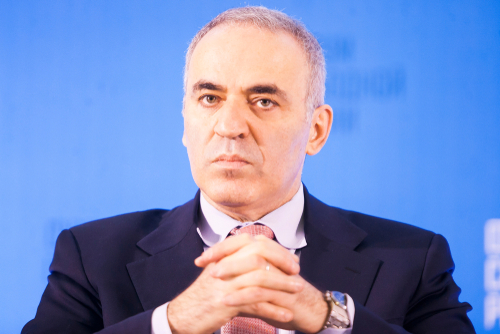 Kasparov urged the western countries to intensify their military and economic strategies against the Kremlin, calling on all countries to recall their ambassadors from Moscow, to boot Russia from Interpol, and to enforce a no-fly zone over Ukraine.

Talking to Reuters, Kasparov argued there could be no peace in the region as long as Putin remains in power. “The list of what Putin would ‘never do’ has grown so long”, an exasperated Kasparov declared, pointing out that “he has committed war crimes beyond imagination.”

Kasparov fled from Russia in 2013, fearing he would be prosecuted for his human rights activism, his support for the Russian opposition and for the fallout from the 2011-2013 mass protests. Having since obtained Croatian citizenship, he lives in New York and Podstrana.

Before leaving Russia, Kasparov formed the United Civil Front movement and joined a coalition opposing the Putin administration. He intended to run for president against Putin, but withdrew his candidacy citing “official obstruction”. Since his self-imposed exile, he has chaired the New York-based Human Rights Foundation, and has founded the Renew Democracy Initiative, a non-profit dedicated to promoting liberal democracy.

In his Reuters interview, Kasparov did not mince words about what the West should do about the current regime in Moscow. “Russia should be thrown back into the Stone Age to make sure that the oil and gas industry and any other sensitive industries that are vital for survival of the regime cannot function without Western technological support”, he maintained.

Kasparov also criticised US President Joe Biden for failing to take more aggressive action towards Putin at an earlier date. “I hope that Americans will revise their strategy and show strength”, Kasparov observed.

Tags: Garry KasparovKasparov called on for world powers to adopt a harsher strategy against Russia