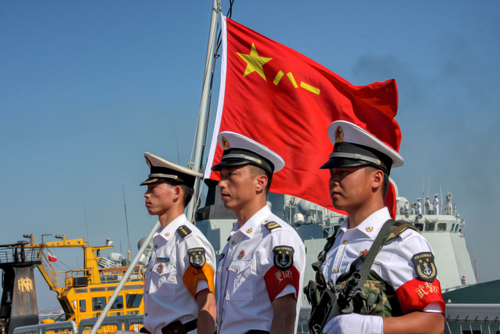 Belgium (Brussels Morning Newspaper) Chinese and Russian air forces held a joint military drill on Tuesday, the first of its kind since the Russian invasion of Ukraine, prompting Japan and South Korea to scramble their jets in response.

The joint patrol lasted 13 hours and consisted of strategic bombers – Russian Tupolev Tu-95 and Chinese Xian H-6 jets – taking them over the Japanese and East China seas, according to the Russian Defense Ministry. The Sino-Russian exercise was shadowed during parts of its mission by Japanese and South Korean air forces.

While China refused to condemn the Russian invasion of Ukraine, it has so far stopped short of providing any military aid to Russia. The Tuesday exercise marked the first example of direct military cooperation between Moscow and Beijing since 24 February. The two sides declared a “no-limits partnership” in the weeks prior to the invasion, and it remains unclear whether Russian President Vladimir Putin informed his Chinese counterpart Xi Jinping about his invasion plans.

“We think it shows that China continues to be willing to closely align themselves with Russia, including through military cooperation,” a senior US official told Reuters, noting such exercises must be planned well in advance. “China is not walking away from Russia. Instead, the exercise shows that China is ready to help Russia defend its east while Russia fights in its west,” he said.

The Russian-Chinese exercise coincided with the last leg of US President Joe Biden’s Asia tour, during which the US assured its allies it would stand with them to push for a free and open Indo-Pacific region. On Tuesday, Biden was visiting Tokyo where he was scheduled to meet with Indian Prime Minister Narendra Modi and Australia’s new Prime Minister, Antony Albanese.