Russian activist Alexei Navalny unconscious after being ‘poisoned in hospital’ 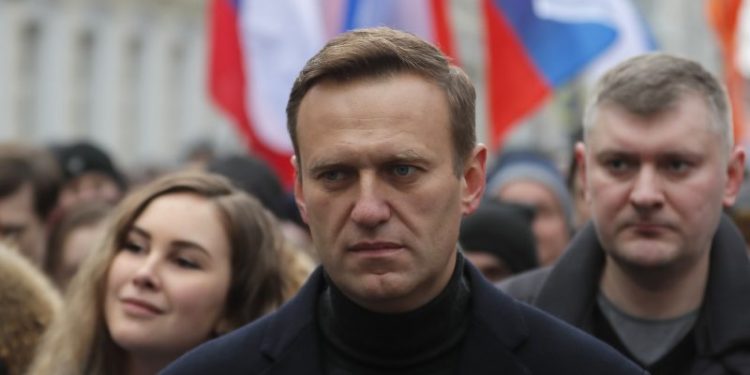 The Russian opposition activist Alexei Navalny is unconscious in hospital after allegedly being poisoned with a toxic substance in his tea, according to his press secretary.

A doctor at the hospital said that Navalny was in “serious condition” but did not specify the cause. The opposition activist is currently on a ventilator.

Navalny, 44, an outspoken critic of Russian president Vladimir Putin, was reported to be returning to Moscow by plane from Tomsk in Siberia when began to feel ill, she said.

The plane made an emergency landing in Omsk and he was taken to hospital where he was unconscious on Thursday morning in intensive care, she said. A mobile video shot on the plane showed medical personnel rushing on board as a man screams in agony.

“At the beginning of the flight he went to the toilet and didn’t come back,” wrote Pavel Lebedev, who also published a photo of Navalny drinking tea at the airport cafe before the flight. “He started feeling very poorly. They could barely revive him and he’s still crying out in pain.”

Other video published by several Russian news sites showed the opposition leader being wheeled on a gurney from the plane to an ambulance waiting on the tarmac in Omsk.

Yarmish wrote that they believed Navalny had ingested a toxic subject but did not yet know what.

“We assume that Alexei was poisoned with something mixed into his tea. That was the only thing he drank this morning. The doctors say that the toxin was absorbed more quickly because of the hot liquid. Right now Alexei is unconscious,” she added.

Yarmysh drew a parallel with an incident last year in which Navalny suffered an acute allergic reaction one doctor said could have resulted from poisoning with an unknown chemical.

“One year ago, Alexei was poisoned when he was in jail,” she wrote. “Clearly the same thing has happened again.”

A doctor at the hospital told journalists that Navalny’s condition was “stable.” “There’s no certainty that the cause is poison but that is one of the versions,” said Anatoly Kalinichenko, the deputy head of the hospital, in remarks to journalists.

Russian opposition leaders have been targeted with violence in the past. In 2015, opposition leader and former deputy prime minister Boris Nemtsov was shot four times and killed within sight of the Kremlin. Five men from Chechnya were jailed in the attack, although his family believes that those who ordered the killing were never caught.

Navalny, who has campaigned against Putin’s rule for years, was travelling through several cities in Siberia to back candidates he supports in local elections involving 40 million voters next month. He posed with supporters for a photograph from Tomsk posted on Wednesday, calling for more volunteers: “These crooks won’t kick themselves out of office,” he wrote.

He may also have been gathering information for an investigation into local United Russia lawmakers, the local news site Taiga.Info, wrote. Revelations of corruption in his investigations into senior members of the Russian government, including prime minister Dmitri Medvedev, have fuelled street protests and provoked angry threats from powerful officials.

“There is no doubt that Navalny was poisoned for his political position and activity,” said Vyacheslav Gimadi, the head of the legal department of Navalny’s Fund Against Corruption. Navalny was also attacked in 2017 with a green dye that left him with partial blindness in one eye.

Several opposition figures have been targeted with poison since Vladimir Putin came to power in 2000. Alexander Litvinenko, a former FSB officer who defected to the UK, died in 2006 of radiation sickness after ingesting a lethal dose of polonium-210 slipped into his tea. One of the men accused in his poisoning is now an MP in Russia’s parliament.

Opposition activist Petr Verzilov recently revealed a poisoning attempt against his life in Moscow in 2018. “I spent several months in the emergency ward in Moscow and Berlin,” he wrote. “The first few days the doctors were fighting for my life and were not sure I would live. In two years there has been no attempt to investigate my attempted murder.”

Navalny has also used the Belarus protests against its president, Alexander Lukashenko, to try to persuade Russians to back candidates he supports in next month’s local elections.

In a recent appearance on his YouTube channel, Navalny spoke excitedly of how successful strikes by key workers in Belarus had forced authorities to start engaging with protesters.

Video clips of Belarusian workers declaring they had voted for the opposition accompanying his commentary were labelled “Russia of the future”.

One of his aides, Leonid Volkov, said he and fellow activists were monitoring the Belarusian authorities’ tactics. “We’re carefully watching Lukashenko’s attempts to switch off the internet,” Volkov wrote on Twitter. “It’s really important because without doubt the same things await us in Russia.”

Activists believe they may face a Belarusian scenario when Putin comes up for re-election in 2024 after he successfully got the constitution changed to allow him to run again for president twice.

“In today’s Belarus we can see ourselves in the near future,” said opposition politician Dmitry Gudkov. “The opposition candidate gets 80% and the dictator is struggling to get 10%, but the election commission simply swaps the results.”

There are signs that the Kremlin was alive to the potential threat from the Belarus protests. State-backed media, after initially depicting the Belarusian opposition in a sympathetic light, have begun to change tack, talking of foreign meddling, a purported long-standing Polish interest in dominating the region, and “coloured revolutions” – a reference to previous uprisings in Georgia and Ukraine.