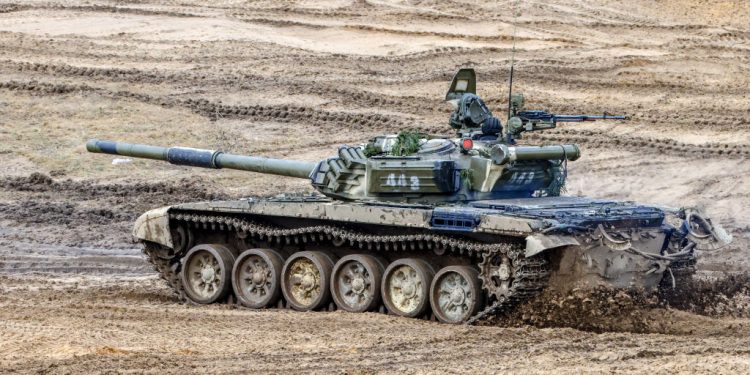 BREST REGION, BELARUS - FEBRUARY 19, 2022: A T-72B tank takes part in the Allied Resolve 2022 joint military drills held by Belarusian and Russian troops at the Obuz-Lesnovsky training ground. The military exercise is being held from February 10 to 20 as part of the second phase of testing response forces of the Union State of Russia and Belarus.

Belgium (Brussels Morning Newspaper) The Kremlin announced on Friday that it will introduce retaliatory sanctions on all western nations which have imposed sanctions against Moscow over its invasion of Ukraine.

Kremlin spokesman Dmitry Peskov said that western sanctions will, indeed, cause problems for Russia, but that they would be solvable, as Moscow has reduced its dependence on foreign imports.

His announcement came as the EU was reportedly planning a third round of sanctions against Russia, to complement the first round implemented after Russian recognition of two rebel territories in Ukraine, and the second, agreed on Thursday evening after the Russian military rolled into Ukraine in a full-scale invasion.

The next wave of sanctions will include asset freezes for President Vladimir Putin and his Foreign Minister, Sergey Lavrov. Reportedly, the sanctions will not include travel bans for Putin and Lavrov, since the goal is to keep a symbolic door open for future diplomatic efforts.

France’s Finance Minister, Bruno Le Maire, told his EU counterparts at a meeting in Paris that removing Russia from the SWIFT international banking transaction system remained an option, but that it should only be used as a last resort.

With Russia’s economy dwarfed by the EU’s economic output, any retaliatory sanctions against European states will likely harm Moscow more than Brussels. While Russia has very low foreign debt levels, and more than 643 billion dollars in currency reserves, analysts are generally of the opinion that its economy will eventually suffer from western sanctions, hobbling the country’s growth potential in the longer run.

Despite healthy economic figures, Russian household incomes remain below 2014 levels, which was when Moscow was first hit by western sanctions after it annexed the Ukrainian Crimea peninsula. Income levels are thought likely to drop further as the impact of western sanctions reaches more and more segments of the Russian economy.