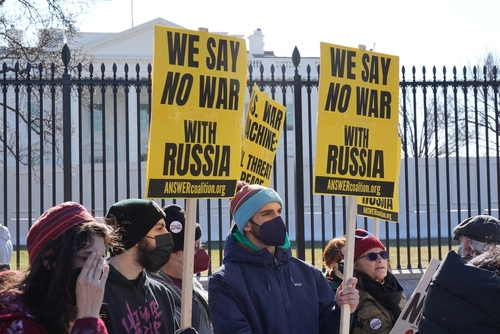 Washington, DC – January 27, 2022: Anti-war protesters at the White House call for peace at a rally demanding no war with Russia over the Ukraine crisis.

In an apparent backtracking of the Kremlin’s hardline stance, Lavrov hinted at the possibility of a diplomatic solution emerging that would end the impasse between Moscow and the west over Russian troops massing on Ukrain’s borders.

Lavrov reportedly told Putin that the US offered concrete proposals on how to reduce the military risks in Eastern Europe, offering negotiations on a range of subjects, from limits to missile deployments in Europe to future restrictions on military drills in the wider region. Yet Lavrov also condemned the responses from NATO and the EU, saying they have been unsatisfactory.

Putin and Lavrov held a televised conversation, in which the Russia’s President asked his chief of diplomacy whether there was a real chance to reach an agreement that would satisfy Moscow’s security concerns, or whether Russia was just being dragged into unproductive, torturous negotiaions.

“We have already warned more than once that we will not allow endless negotiations on questions that demand a solution today”, Lavrov assured Putin, while indicating that chances to do just that always exist. “It seems to me that our possibilities are far from exhausted. At this stage, I would suggest continuing and building them up.”

Meanwhile, prominent Ukrainian oligarchs are reportedly fleeing the country as a possible Russian invasion looms large. Far from being the only ones seemingly cutting their losses, Ukrainian international airlines announced today that its insurers had sent it official notification, terminating the company’s insurance contracts for its aircraft when flying in Ukrainian airspace.