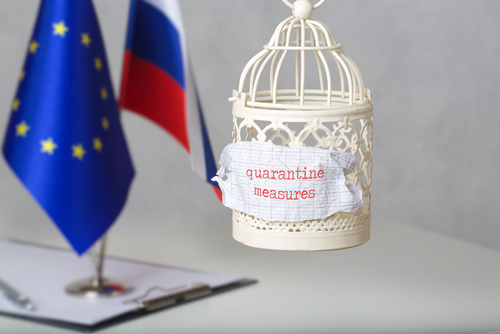 Speaking in St. Petersburg at a meeting with his Finnish counterpart, Pekka Haavisto, Lavrov maintained that the EU is targeting mechanisms for cooperation.

“The EU has consistently destroyed all mechanisms without exception,” he observed, while making clear that this would not push Russia away from Europe. “Don’t confuse Europe with the European Union. When it comes to Europe, we are not going anywhere,” Lavrov concluded.

Friction between the EU and Russia increased with the recent arrest of Russian opposition politician Alexei Navalny and the mutual expulsion of diplomats that folowed.

On 23 January, diplomats from Germany, Poland and Sweden attended unauthorised protests in Russia and were expelled on 5 February. Josep Borrell, High Representative of the EU for Foreign Affairs and Security Policy, who was on an official visit to Moscow, was not informed by his hosts of the expulsion at the time.

The three countries responded by deporting Russian diplomats three days later. Lavrov insists the three diplomats who attended the protest “knew perfectly well that they are not fulfilling their functions according to the Vienna Conventions.”

On Friday, Lavrov warned that Russia was prepared to sever ties with the EU if the bloc decides to impose sanctions over the Navalny and related incidents. Germany declared it found Lavrov’s statement incomprehensible and disconcerting.

Earlier this month, unnamed EU diplomats had spoken of the possibility of imposing sanctions on allies of Russia’s President Vladimir Putin as early as this month.

Finland’s Haavisto denounced the arrest of Navalny and the expulsion of the EU diplomats, pointing out that they attended the protest as observers. He acknowledged that relations between the bloc and Russia are strained but noted that the three deported diplomats had been operating in line with international agreements.According to Russia’s TASS news agency, Lavrov insists the diplomats were “meddling in Russia’s internal affairs.”