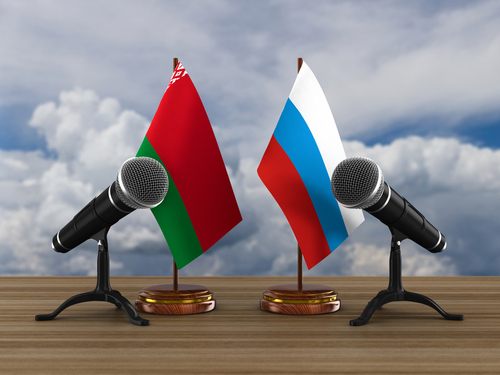 Brussels (Brussels Morning) Russian President Vladimir Putin met his Belarusian counterpart Alexander Lukashenko on Thursday in Moscow, with the two leaders agreeing on a roadmap for further integration between the two countries.

Putin and Lukashenko reached a deal on setting up a unified energies market, with Putin announcing the two countries would sign a document detailing a unified gas market before the end of 2023, with unified oil and electricity market deals soon to follow.

Belarus and Russia are already formally a part of a “union state”, with a possible goal of ultimately joining the two countries into a single, sovereign entity. Fearing Belarus would be subdued in such a union by its significantly larger and stronger partner, the Belarus opposition is accusing Lukashenko of trading the nation’s sovereignty in exchange for Moscow’s support in his confrontations with the West.

The meeting took place in parallel with a week-long joint military exercise involving Russia and Belarus, which will take place across both countries’ territories and in the Baltic Sea. Putin, who likely sees Belarus as an important buffer between Russia and NATO countries, said the drills “made sense” in the light of what he sees as NATO attempting to bolster its presence in the region.

Belarus has become increasingly reliant on Russian aid as Lukashenko alienated the EU and the US with what critics described as a brutal crackdown on opposition protests following last year’s presidential elections. The opposition claimed that the elections were rigged, while the EU stressed that they were “neither free nor fair” and refused to recognise the outcome.

Minsk’s relations with the West became strained further as Lukashenko ordered his military’s planes to force a commercial passenger plane to land in Belarus in order to arrest a dissident journalist and his girlfriend.

Striking back against EU sanctions that followed this move, Lukashenko moved to invite refugees from the Middle East into Belarus and then send them over to the nearest land border with the EU – that of Lithuania, which has become overwhelmed by migrant arrivals in recent months.