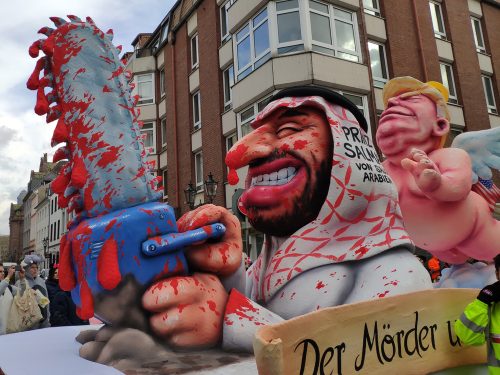 RSF invoked Germany’s international jurisdiction laws in accusing the de facto ruler of Saudi Arabia of “crimes against humanity”, including ordering the murder of Saudi dissident and Washington Post columnist Jamal Khashoggi and the arbitrary detention of other media professionals.

“The official opening of a criminal investigation in Germany into the crimes against humanity in Saudi Arabia would be a world first”, RSF Germany Director Christian Mihr said. “We ask the Public Prosecutor General to open a situation analysis, with a view to formally launching a prosecutorial investigation and issuing arrest warrants”, he added.

The German Code of Crimes Against International Law enables German courts to rule on breaches of international law, which the RSF argues is the case with regard to bin Salman’s treatment of journalists in Saudi Arabia.

The crimes against humanity listed in the RSF complaint include “willful killing, torture, sexual violence and coercion, enforced disappearance, unlawful deprivation of physical liberty, and persecution”. The RSF described 35 cases, including Khashoggi’s, in which 33 journalists have been held in detention.

“The cases detailed in the complaint reveal a system that threatens the life and liberty of any journalist in Saudi Arabia — in particular those who speak out publicly against the Saudi government”, RSF asserted in a statement.

The RSF complaint follows on a verdict handed down last week in Germany, in which a former Syrian secret service agent was found guilty of crimes against humanity committed against other Syrians in Syria, although in that particular case both the defendant and some of his victims were located in Germany when the trial started.

“German courts have already shown readiness and willingness to prosecute international criminals”, RSF said, in explaining why it had chosen to file its complaint with the German judiciary.