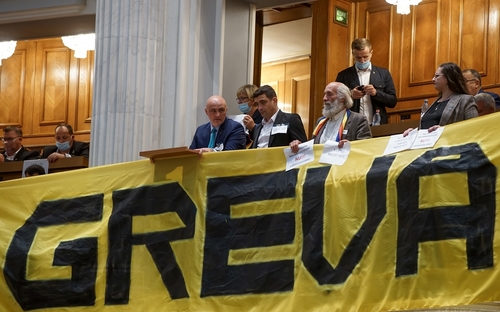 The Romanian parliament was scheduled to vote on Ciuca’s proposed government on Wednesday. Political analysts widely expected Ciuca to lose the vote, after the largest parliamentary party, the opposition’s centre-left Social Democratic Party (PSD) said it would not back a government with Ciuca at its helm.

Following a marathon party meeting late on Monday, Ciuca told reporters that his party’s executive committee decided to cancel his mandate, and to take a “more flexible” approach to further negotiations with other groupings in the parliament in order to find a replacement for him.

Ciuca, a 54-year old retired army general currently serving as defence minister in the caretaker government of Florin Citu, was nominated to be the country’s next PM by Romania’s President Klaus Iohannis last month. Iohannis had asked Ciuca to form a centrist government and end the political stalemate in the face of a national healthcare crisis caused by soaring coronavirus cases.

Ciuca proposed a cabinet composed of PNL members, and the ethnic Hungarian minority party UDMR members, but the Social Democrats rejected his lineup, saying they would only support a government of technocrats.

Romania was plunged into a government crisis last month when the centrist USR party withdrew its ministers and refused to continue backing the Citu government, after a row over a regional development fund.

Following cancellation of the vote of confidence in the proposed Ciuca cabinet, Iohannis is now expected to hold further talks with the major political parties in a bid to find a compromise solution aimed at finding a prime minister likely to receive a majority backing.