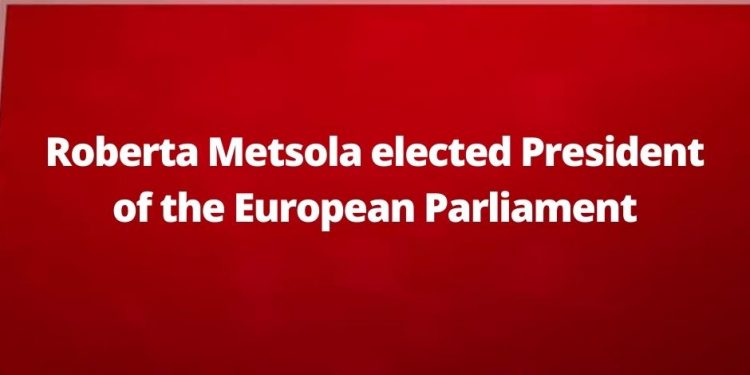 Metsola succeeded Italian socialist David Sassoli in the mostly ceremonial role presiding over the 705-member parliament of the European Union after he died this month at the age of 65.

She achieved a total of 458 votes from 616 valid votes – far above the absolutely majority of 309 which was required.  It is the equivalent of 74.3% of the votes cast.Alice Bah Kuhnke (from the Greens/EFA) received 101 votes, while Sira Rego (from The Left) received 57 votes.

Sassoli had in any case been due to step down this week as part of a power-sharing deal under which parliament’s socialist group would step aside halfway through the assembly’s five-year term for a candidate from Metsola’s center-right European People’s Party (EPP) grouping.

“It’s about time that the European Parliament is led by a woman,” Metsola, 42, said in a campaign message on Twitter, calling for the assembly to connect with EU citizens beyond the “bubbles” of Brussels and Strasbourg where it meets.

The parliament, which adopts and amends legislative proposals and decides on the EU budget, has had only two female presidents, Simone Veil and most recently Nicole Fontaine, both French since it became a directly elected assembly in 1979.

A Mediterranean archipelago with a population of just over 500,000, Malta became the EU‘s smallest member state when it joined the bloc in 2004.

Who is Roberta Metsola?

Member of the European Parliament, 2013–present

Metsola successfully contested the casual election to fill in the vacated seat of Simon Busuttil on 24 April 2013, becoming one of Malta’s first female Members of the European Parliament. In the Parliament, she sits as a member of the European People’s Party Group (EPP). Following her re-election to the Parliament for a full term in 2014, Metsola was elected as a vice-chair of the Committee on Petitions (PETI) in July 2014.

In addition, she served as a member of a number of committees and delegations including the Committee on Civil Liberties, Justice and Home Affairs (LIBE) and the Delegation for relations with the United States.From 2016 until 2017, Metsola was part of the Parliament’s Committee of Inquiry into Money Laundering, Tax Avoidance and Tax Evasion (PANA) that investigated the Panama Papers revelations and tax avoidance schemes more broadly.Within LIBE, she has been part of the Rule of Law Monitoring Group (ROLMG) since 2018.